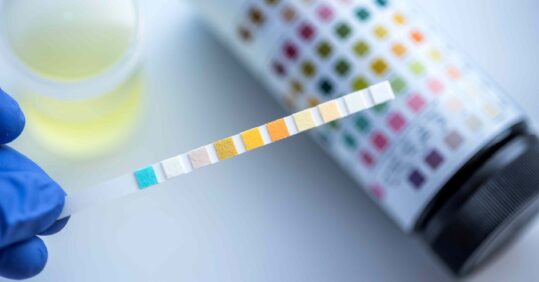 Urinary tract infections could be diagnosed within 25 minutes in primary care in the future thanks to a new camera test developed by researchers.

The test, designed by University of Bath researchers, involves a urine sample being used on a plastic strip containing an antibody that detects E. coli – found in 80% of bacterial UTIs.

An enzyme is added to the strip, causing a change in colour if E. coli is present, which can then be picked up by a smartphone camera, and analysed for concentration.

The research team, which published its findings in the journal Biosensors and Bioelectronics, said it hoped the test could help doctors make decisions about whether to prescribe antibiotics for UTIs.

Having passed the proof-of-concept stage and won plaudits for its low costs, speed and simplicity, the test now needs to be put through clinical trials and might also be modified to detect further infections.

Dr Nuno Reis, from the University of Bath’s chemical engineering department, said: ‘The test is small and portable – so it has major potential for use in primary care settings and in developing countries.

‘Currently, bacterial infections in UTIs are confirmed via microbiological testing of a urine sample. That is accurate, but time-consuming, taking several days. We hope that giving medical professionals the ability to quickly rule in or rule out certain conditions will allow them to treat patients more quickly and help them make better decisions about the prescription of antibiotics.’

‘With around 80% of UTIs being caused by E. coli, we envisaged a quantitative, near-the-patient test for E. coli detection would be extremely valuable to rule-in E. coli infections and support GPs during antibiotic prescriptions.’

Urinary tract infections could be diagnosed within 25 minutes in primary care in the future due to a new test developed by researchers.