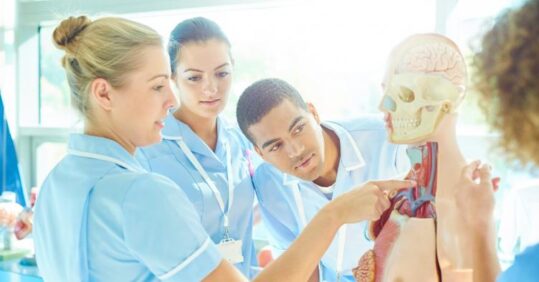 NHS England chief executive Amanda Pritchard has encouraged young people and anyone looking for a career change to work in nursing or other NHS roles.

Ms Pritchard singled out nursing as one of hundreds of ‘rewarding’ healthcare roles in the health services. This comes as part of the launch of the fourth year of the We are the NHS recruitment campaign yesterday, run by NHS England with Health Education England.

She said: ‘Working for the NHS lets you live a thousand lives through the patients and families you care for, and with around 350 different roles to choose from, there is something for everyone.

‘Joining the NHS was the best decision I ever made, and I’d encourage anyone, whether you’re a school leaver, recent graduate or simply looking for a new challenge to consider joining – no matter what your experience or qualifications – a fulfilling, rewarding and exciting career awaits.’

NHS England claimed the We are the NHS campaign – alongside increased investment for degrees and placements, and the ‘extraordinary work’ of healthcare staff during the pandemic – was partly responsible for the ‘surge’ in applicants to healthcare degrees last year.

Official figures show a 32% increase in applications to undergraduate nursing courses across the UK starting this autumn, compared to the year before.

NHS England added that 94% of nursing graduates are in work within six months of their degree and pointed out they can specialise in a range of disciplines including the community and mental health.

However, the jump in nurse applications this year follows years of decline since the student nurse bursary – which covered tuition fees and helped with living costs in England – was axed in 2017.

The Government introduced a £5,000 annual grant for living costs, which began in September 2020, but nursing leaders have called for more support for students.

This year, the We are the NHS recruitment campaign will see nurses, allied health professionals and healthcare support workers sharing their experiences.

Speaking as part of this year’s campaign launch, newly qualified nurse Craig Royce said he would ‘love to see more men considering nursing in the future’, adding ‘it’s a career I wish I had considered future’.

He continued: ‘I’m originally from the North East and previously worked within retail, but having found volunteering with young people very worthwhile, I decided to make a change and pursue a career in helping people.

‘I have dyslexia and was never fond of education, but the training for this role has worked really well for me, and I was able to complete my A levels as a mature student alongside another job.’

Ruth May, chief nursing officer for England, said: ‘The diversity of the NHS nursing and midwifery workforce is one of its greatest strengths and we encourage people with and without health experience to consider joining us.

‘I’ve never been prouder to be a nurse in the NHS, so if you want to make a difference to patients, we look forward to welcoming you to one of the most rewarding jobs you can do.’