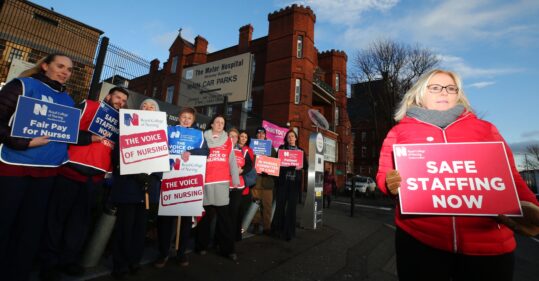 The nurses voted to accept staffing and pay parity proposals from the Northern Ireland Department of Health in February, after going on strike in December 2019 and January 2020.

In March, it was announced the money docked would be repaid and in May £1.64m was allocated to cover the reimbursement – but the nurses have still not received the money. Nursing in Practice has asked the NI health department when the money will be paid but is still awaiting a response.

Health minister Robin Swann revealed in October that he had had to seek legal advice on the potential repercussions of the decision, which meant payment had been delayed.

On Tuesday last week, the executive finally voted for the reimbursements to go ahead.

Mr Swann said the issue had been ‘complex’ as it involved ‘legal considerations and the question of whether a precedent could be set for industrial action across many different workforces’.

He continued: ‘I have worked hard to find a way through these complexities. I informed Executive colleagues last week that a way forward was on its way and I am pleased that my recommendation on this matter was agreed by the Executive on Tuesday.

‘I hope now we can all put that chapter behind us and keep working together on combatting Covid-19 and rebuilding our health service.’

Nurse pay in Northern Ireland had fallen behind the rest of the UK, with newly qualified NHS nurses earning £22,795, while their counterparts in England and Wales started on £24,214.

At the time of the strikes, there were 2,800 vacant nursing posts and nurse pay had fallen by 15% in real terms in recent years.

RCN Northern Ireland director Pat Cullen said: ‘While I know that every nurse and nursing assistant affected by this will be relieved that the Department of Health has finally released this money, the fact is that it was given to them by the Department of Finance in May.

She added: ‘Members have rightly been asking us for months why the Department was withholding the payment of this. It would mean a lot to nursing staff if they didn’t have to fight so hard in the future to ensure that what has been promised is delivered.’