The number of NHS nurses and health visitors has fallen for the first year since 2013, new research has revealed.

The analysis, by The King’s Fund’s director of policy Richard Murray, shows that there were fewer NHS nurses in post in April this year compared to April 2016, the first year-on-year monthly fall since April 2013.

But despite the drop in nurse and health visitor staff levels, the number of midwives increased by 103 during the same period.

There was an increase of 55 FTE midwives during the year.

In his analysis, Mr Murray noted the ‘significant reduction in EU nurses joining the UK register since the EU referendum’ and ‘changes to language testing requirements, together with an increasing number of EU staff leaving the NHS’.

‘The number of NHS staff leaving as a result of ill-health and work-life balance has also increased sharply over the last few years,’ Mr Murray said.

The analysis shows that the decline is largely due to the decrease in EU nurses coming to the UK and to the high rate of burnout among existing registered nurses. 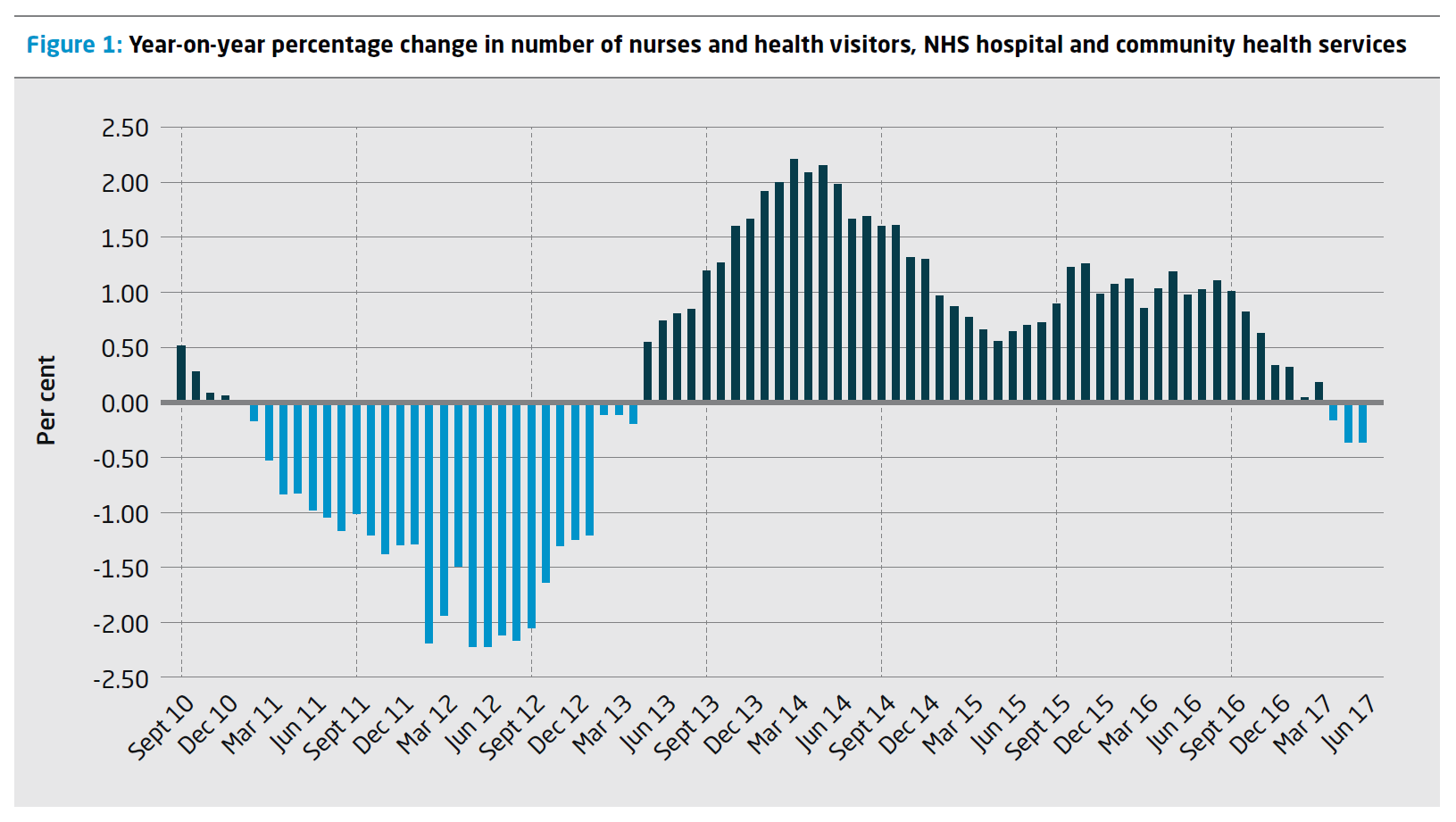 Janet Davies, chief executive and general secretary of the Royal College of Nursing, said: ‘The Government’s boasts of increasing nursing staff are starting to ring more than a little hollow. Since the stark warnings made by Robert Francis four years ago, Jeremy Hunt prided himself on rising numbers but this expert analysis reveals a worrying decline.

‘Nursing staff are now blowing the whistle on falling standards and the risks to patients. When the NHS has never been busier, it is haemorrhaging experienced nurses at a faster rate than it can find new recruits. A lethal cocktail of extreme pressure inside the NHS, a collapse in European nurses and falling pay levels left the profession demoralised and people heading for the door.

‘This analysis reinforces the need for mandated staffing levels and investment in nurse education. Health and care providers must give urgent assurances that services are safe for patients this winter. The decline is a direct result of years of poor decisions and excessive cost-cutting – we need a new law that makes Ministers and others accountable for proper workforce planning and safe and effective staffing levels.’

The analysis shows that the nursing workforce has now entered a new phase, having gone through three distinct phases in recent years:

The number of nurses registered follows a seasonal trend, where numbers rise in the autumn as newly qualified nurses join the register and then reduce during the rest of the year. So figures must be compared year on year to give an accurate image of how the workforce is changing.

Mr Murray said: ‘Doing this reveals a worrying picture: the number of nurses employed in the NHS (on a headcount or full-time equivalent basis) is falling for the first time in more than three years.

‘There is good evidence that having enough nurses is essential for delivering safe care, and so it is worrying that the number of nurses is going down at a time when services are already overstretched and the demand for care is rising.

‘This means the NHS is less equipped to cope with the demands of a winter that was already threatening to stretch the NHS to the limit.

‘While last week’s announcement of an increase in nursing training places is welcome, it will take years for this to translate into extra nurses.

‘Workforce planning has been neglected for too long in the NHS, and the fact that the EU referendum result appears to have tipped the balance highlights how fragile the workforce situation has become. A new workforce strategy is desperately needed.’

The number of NHS nurses and health visitors has fallen for the first year since 2013, new research has revealed.