The leaders of the Nursing and Midwifery Council (NMC) and the Royal College of Nursing (RCN) have responded to a opinion piece published in the Sunday Times last week which implied that nurses are overpaid for their abiities.

In a joint letter, published by the Sunday Times yesterday (30 July), the nurse leaders wrote to ‘register their concerns’ about the controversial newspaper column from 23 July, which they described  as ‘misguided and disrespectful’. 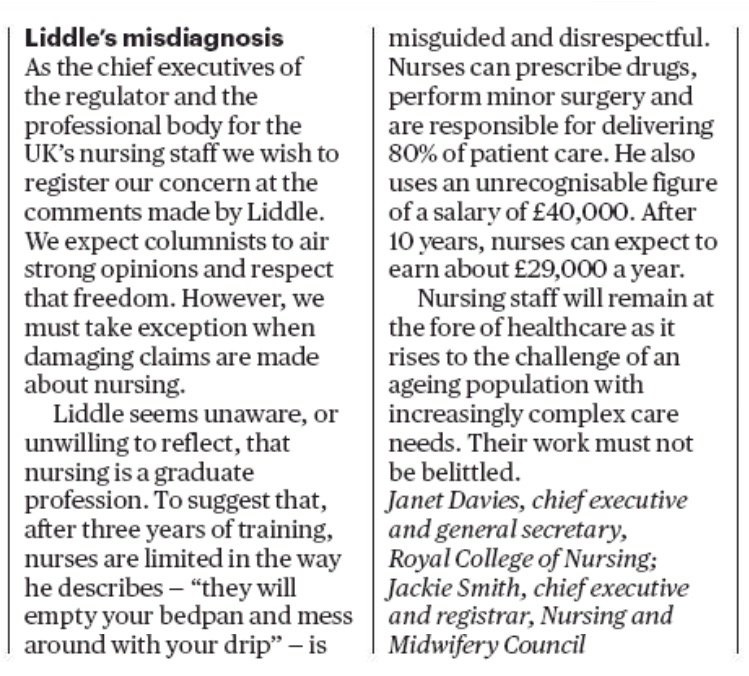 In last week’s piece, columnist Rod Liddle compared the value of nurses with high profile presenters at the BBC.

He asked if ‘anyone should ever be paid more than nurses’, claiming that they may know ‘almost nothing about medicine but they will empty your bedpan and mess around with your drip for a while, until someone more senior comes along.’

He continued by stating that nurses could get paid more than £40,000 for being ‘quite useful in hospitals’.

The article provoked widespread criticism from nurses on social media, including former RCN chief executive Peter Carter who described it as ‘truly shocking’.

A truly shocking article by Rod Liddle in today’s Sunday Times about nurses. Patronising belittling. Even by his standards this is a new low

In their letter, Ms Davies and Ms Smith said Mr Liddle seemed ‘unaware, or unwilling to reflect, that nursing is a graduate profession’.

‘To suggest that, after three years of training, nurses are limited in the way he describes is misguided and disrespectful,’ they said pointing out that nurses could prescribe, perform minor surgery and are responsible for delivering 80% of patient care.

The salary of £40,000 mentioned in the column is an ‘unrecognisable figure’, they said, stating that nurses could expect to earn about £29,000 a year after working for 10 years.

‘Nursing staff will remain at the fore of healthcare as it rises to the challenge of an ageing population with increasingly complex care needs. Their work must not be belittled,’ they added.

The leaders of the Nursing and Midwifery Council (NMC) and the Royal College of Nursing (RCN) have responded to a opinion piece published in the Sunday Times last week which implied that nurses are over paid for their abiities.