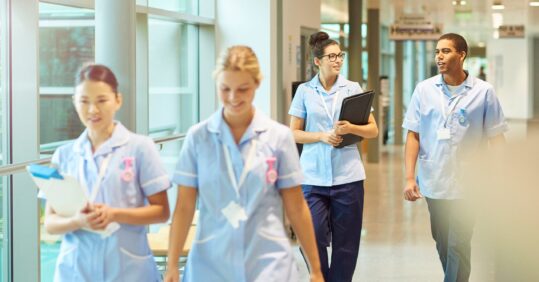 The number of nurses, midwives and nursing associates is at an all-time high but the workforce is ageing, new figures from the Nursing and Midwifery Council (NMC) have revealed.

Though numbers of specialist nurses – such as in learning disability and mental health – has remained stable over the last six months, the NMC highlighted that demand ‘continues to grow’ and there are still 1,000 fewer learning disability nurses than four years ago.

The Council also warned that with the number of registered professionals approaching retirement age is growing quicker that those under 30, tackling recruitment and retention is ‘more important than ever’.

The same period also saw a sharp rise in the numbers of professionals from outside the EU joining the register, jumping from 73,308 to 77,373 – an increase of 5.5%. The change comes as the overall number of professionals from the EU continues to decline, dropping 3.21% in April to 31,973.

Overall, the number of midwives on the register grew by 0.92% to 37,255. Nursing associate numbers soared from 489 to 1,488 in England after joining the register for the first time in January.

‘Against a backdrop of rising vacancies’

Responding to the figures, Andrea Sutcliff CBE, chief executive and registrar at the NMC, said: ‘We know the incredible impact that nurses, midwives and nursing associates have in providing highly skilled and person-centred care for millions of people living across all four countries of the UK. I’m pleased to see such an increase of people on our register.

‘It’s important we recognise the enormous contribution that nursing and midwifery professionals from overseas continue to make for people in the UK. It’s clear they are a vital part of our UK health and care workforce, and I’m glad to see the recent changes we’ve made to streamline our processes for those joining the register from outside the UK are making a real difference.

‘But the reality is, even with this considerable mid-year growth, there are still serious shortages across the health and care sector – not least in specialist areas such as mental health and learning disabilities.

‘With so many on our register nearing retirement age, it’s more important than ever that partners across the system work together to tackle the important issue of recruitment and retention of the essential nursing and midwifery workforce.’

Dame Donna Kinnair, chief executive and general secretary of the RCN, said the slight boost in the number of nurses on the UK register is ‘good news,’ but warned that the increase ‘comes against a backdrop of rising vacancies in England’.

She also pointed out that the nurse numbers in Northern Ireland – where there is industrial and strike action – fell from 21,641 to 21,360, which she said demonstrates ‘the extent of the shortage and the urgent need for action to address the recruitment and retention crisis there.’

She continued: ‘It’s also very worrying to learn that there’s been a net loss from the register of over 1,000 nurses from EU countries in just the last six months.  This drop in numbers has clearly been due to continued uncertainty over Brexit.’

Dame Donna warned that the Government ‘risks deterring future overseas nurses by increasing the Immigration Health Surcharge all migrants pay for the NHS from £400 to £625’. This has previously been reported on by Nursing in Practice.

She continued: ‘The NMC is right to raise concern about the ageing profile of the nursing workforce.  The fact that the number of nurses nearing retirement age is now outstripping those under 30 highlights the huge effort that needs to be put into attracting more students onto nursing degrees.  Official figures show there has been a 25% drop in applications to study nursing since 2016 when financial support for such students ended in England – the RCN is calling for both tuition fees and maintenance grants to be funded by the Government for all nursing students in England.

‘All these concerns combined mean we need to see urgent investment by governments across the UK to increase the number of nurses, at a pace that can keep up with the growing pressure on all health and care services.  Unless this investment is forthcoming, the overall increase will be short term and once again leave patients missing out on the care they need.’

The number of nurses, midwives and nursing associates is at an all-time high but the workforce is ageing, new figures from the Nursing and Midwifery Council (NMC) have revealed.