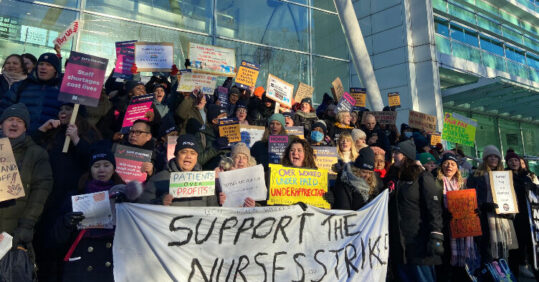 Nurses from 55 NHS employers took to the picket lines today, on the first of two days of planned industrial action taking place across England.

Members of the Royal College of Nursing on Agenda for Change contracts braved the cold weather in the hopes of winning a better pay deal for nurses, after NHS staff were awarded a below inflation pay rise in last June’s pay review.

Speaking ahead of the strikes and referring to further strikes scheduled for February, RCN general secretary Pat Cullen, called for a response from the Government.

‘Today’s strike action by nursing staff is a modest escalation before a sharp increase in under three weeks from now,’ she said.

On the picket lines outside UCLH in London today, spirits were high as passing buses and ambulance honked horns in support of the striking nurses.

Yasmin, a nurse working in an infection control team, told Nursing in Practice that she was ‘seeing the impacts of the staff shortages on the quality of care. Staff are coming in knowing that the ward is going to be short staffed and leaving knowing that they couldn’t do everything they could do to protect their patients.’

Emma Ings, a cancer nurse who works on the day-care ward, told Nursing in Practice: ‘I am striking because I feel that nursing is broken. The staff are broken, they’re tired, they’re over worked, and the demands are just getting bigger all the time.

‘This has never been an easy job but its not about the pay; we’re not here to get rich, but this is about the fact that we can’t do our jobs properly. For the first time, if someone asked me whether they should go into nursing as a career, I would say no.’

Ms Ings also pointed out that the financial pressures on nurses were driving staff away and making it difficult to work, adding that because of train prices: ‘I pay £30 to come into work, just for the privilege,’ she said.

“For the first time, if someone asked me whether they should go into nursing as a career, I would say no. This has never been an easy job but it’s never been about the pay, it’s the fact we can’t do our jobs properly.” – Emma Ings, Cancer Nurse.#NursesStrike #NHSStrikes pic.twitter.com/TKW6uZmhNY — Nursing in Practice (@NurseinPractice) January 18, 2023

Ms Ings sentiment was widespread among the nurses who turned out in support. Siovan, a urology nurse with 20 years’ experience in the NHS, said that ‘no one would do a four year course if they’re not going to be paid for it. No one in their right mind would do that for such bad conditions and poor pay.

‘I never once thought I would strike, nobody ever thought it would come to this. I want to safeguard nursing for the future.’

To date, the health secretary Steve Barclay has refused to meet with the health unions for formal pay negotiations. However, Ms Cullen said that the union was prepared to escalate the pressure on the Government.

Writing in the Independent, Steve Barclay said that the any pay deal for nurses was unaffordable and would result in worse care for patients.

This wave of industrial action comes as vacancies in the NHS planned workforce record levels, with over 47,000 vacant nursing roles. Nurses on the wards say that they are feeling the impact of this in their every day work, and are going on strike in the hope that a better pay deal will attract more recruits.