Nurses top poll on who makes biggest contribution to society 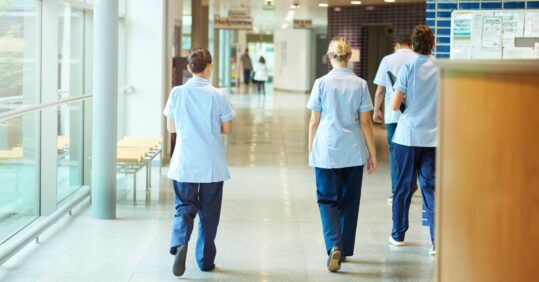 The public believes nurses make the biggest contribution to society, although seven in 10 are concerned there are too few nurses to provide safe care, a poll has shown.

According to a YouGov poll, 16% of respondents selected nurses as the top profession for their contribution to society, followed by doctors (12%) and teachers (12%).

It comes as the RCN wants to start a national conversation about the ‘Best of Nursing’, as the public take to social media to share their appreciation of and support for nursing staff on Nurses’ Day today (12 May).

When asked what skills or qualities were most important for nursing staff to have, compassion (51%), skilled care (42%) and communication skills (29%) were ranked highest in the poll.

Legislation and commitments towards safe staffing vary significantly across nations in the UK, and the RCN has called for safe staffing to be addressed by both legislation, as well as comprehensive and fully funded workforce plans.

RCN general secretary and chief executive Pat Cullen said: ‘The public knows that nursing staff go above and beyond in all they do for patients and those in their care. Our people always defend and champion safe patient care and that is what is being recognised on Nurses’ Day.

‘It is on the public’s behalf that we remind politicians everywhere again today that a fully-funded workforce plan is a major step in keeping our health and care settings safe. They must begin to take responsibility for the current situation and turning it around.

‘Today is a celebration of nursing staff’s clinical excellence, their personal compassion and genuine dedication. I encourage everyone to share stories on the ‘Best of Nursing’, be it from hard working staff on our wards, in surgeries, in the community, in social care and everywhere else.’

A similar poll earlier this year found the British public believed that standards of care in the NHS were declining, with workload and staffing levels named the most pressing issues.