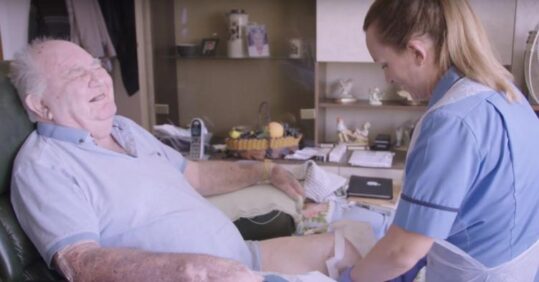 A powerful QNI film encouraging more people to consider a career in community nursing has been shortlisted for a film festival award.

The clip was shortlisted for the World Health Organisation’s Health for All Film Festival in a one-off ‘nurses and midwives’ category for the International Year of the Nurse and the Midwife in 2020.

QNI chief executive Dr Crystal Oldman said: ‘The film shows the significant contribution of all nurses who work in community settings, delivering complex care to patients at all stages of the life course.’

Health Education England chief nurse Professor Mark Radford said: ‘I’m thrilled that our film has received this recognition by WHO.’

He added: ‘Being shortlisted for this award will lead to even more appreciation and acknowledgement of the vital work performed each day by our community nurses.’

WHO received almost 1300 submissions from filmmakers around the world for the three categories. The film was selected as one of just 15 finalists in the nursing and midwifery category.

It was produced by the Queen’s Nursing Institute, Health Education England and design agency Mother London.

It also highlights the shortage of NHS district nurses. Since 2010, numbers have dropped from 7,000 to just over 4,000 in England.

The film was released in January this year after being shot in London, Leeds and Dorset last summer.

It follows a number of district nurses and other community specialists over their working day.

A powerful film encouraging more people to consider a career in community nursing has been shortlisted for a film festival award.