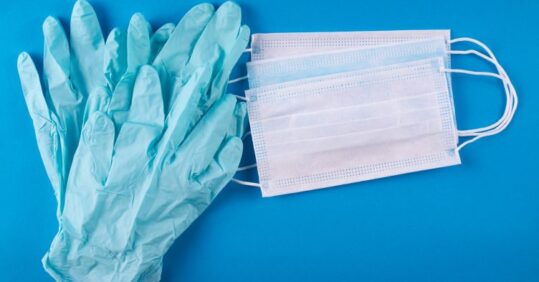 Half of nursing staff in ‘high-risk environments’ have been asked to care for patients without adequate PPE during the coronavirus outbreak, according to survey findings on shortages published on Saturday.

The survey of more than 13,000 nursing staff by the Royal College of Nursing also revealed that one in four (39%) of respondents working in non-high-risk environments said they were being asked to reuse single use PPE.

She continued: ‘The crisis is taking the lives of nursing staff, and their colleagues feel they’ve been left exposed. All decision-makers involved here need to get an urgent grip on the situation.’

The report also found that one in five (18%) respondents had issues with PPE because of individual needs, such as disabilities, religious and cultural practices, having facial hair or wearing glasses.

The survey found that nursing staff had particular problems with spectacles, with a third (30%) of respondents saying they could not access eye protection on their shift.

The report also stated: ‘Respondents described the protective goggles provided to staff as being self-assembly and flimsy.

‘They did not fit properly over their glasses and left gaps at the sides of their eyes. In addition, the lenses were often scratched, and nurses were being asked to re-use and share goggles.’

A total of 13,605 nursing staff including nurses, midwives and nursing support workers over the Easter weekend for the annual State of Primary Care Survey, which was run by Nursing in Practice’s publishers, Cogora.

The results come after the Nursing and Midwifery Council said last week that it will ‘consider context’ if nurses, midwives and nursing associates refuse to work because of a lack of personal protective equipment.

Health and care staff have also resorted to PPE donations because of supply problems.