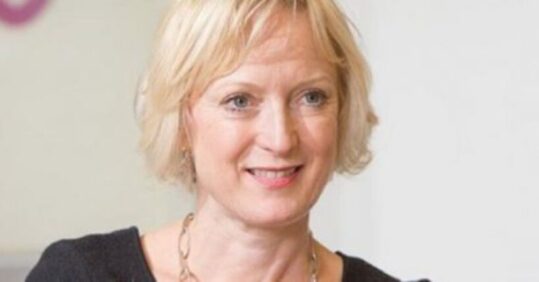 Chief nursing officer for England, Ruth May, has been awarded a damehood
Katherine Price

Dr Ruth May, chief nursing officer for England, has been awarded a damehood for her services to nursing, midwifery and the NHS.

Dame Ruth took over the role in 2018 following the merger of the management teams for NHS England and NHS Improvement, having previously served as executive director of nursing for the latter.

She previously held roles as regional chief nurse and nurse director for the Midlands and East region of NHS England, chief executive for Queen Elizabeth Hospital in King’s Lynn, and for Mid-Essex Hospital Services NHS Trust.

A number of NHS staff, including nurses and midwives, were honoured in the awards, celebrating 70 years of the Queen’s service and Her Majesty’s Platinum Jubilee.

Dame Ruth said: ‘I am proud to receive this award and I do so on behalf of the nursing and midwifery professions who use their expertise to care for us throughout every stage of our lives in hospitals, in our homes and in the community each and every day.’

Ms Fenton qualified as a nurse in 1981 after attending the Normanby School of Nursing. She worked as a director of nursing and quality for Gloucestershire Care Services NHS Trust, as well as a specialist advisor to the Care Quality Commission.

She joined Health Education England in 2015 as a professional nurse advisor before moving to her current role in 2017.

Doheny started her nursing career in London following her training in Cardiff. She later moved to Herefordshire to work as a community nurse in intermediate care and was appointed to the regional chief nurse role in 2016.

She said: ‘I am humbled by this extraordinary recognition. I accept it not for myself but on behalf of all the nurses, midwives, students and those in the caring professions across the South West, where I have spent the most recent six years of my career. Any achievements I have had are as a result of working alongside such dedicated professionals, learning from them, and using that learning to improve care for patients. When I receive the award in person, I shall think of them all in that moment.’

Knight Jackson added that she was ‘overjoyed’ to receive the honour: ‘As a first-generation descendent of Windrush, I stand on the shoulders of giants. For 40 years I’ve had an amazing journey working as a clinician, in academia and as a senior leader and would like to thank my incredible colleagues past and present who have supported me.’

Lisa Carmody, a community support worker and training manager with Quartz Care, and Paul Evans, a senior support worker at Action 4 Care, were recognised with a British Empire Medal, as was Anne Trotter, assistant director of education and standards at the Nursing and Midwifery Council (NMC).

Andrea Sutcliffe, chief executive and registrar at the NMC, said she was ‘delighted’ for Ms Trotter’s ‘tremendous contribution’ being recognised. ‘Anne has played a critical role in the overhaul of all our education standards in recent years and her work will have a lasting impact on nursing and midwifery professionals for a long time to come,’ she said.

Ms Sutcliffe also described Gill Walton and Professor Mary Renfrew as ‘fantastic leaders of the midwifery profession’ who have ‘made a huge difference to improving maternity services’ and praised the ‘phenomenal’ leadership of Dame Ruth through the pandemic.