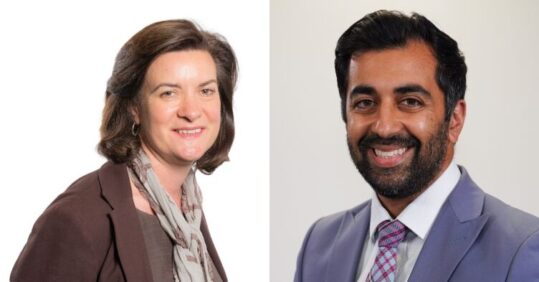 A joint letter sent by the Scottish and Welsh health secretaries has called on the UK Government to provide additional funding to help avoid a nurses’ strike winter.

Humza Yousaf, Scottish health secretary, and Eluned Morgan, Welsh minister for health, have jointly signed a letter to Steve Barclay, UK health secretary, to ‘once again make the case for additional funding for our hardworking NHS staff’ ahead of the Chancellor’s autumn statement this Thursday.

This follows RCN members in all Scottish NHS employers, and all bar one in Wales, making the threshold for legal industrial action, giving the RCN a broad mandate to conduct a nurses’ strike. While no strike dates have yet been confirmed RCN representatives indicate that they will take place before Christmas.

The joint letter read: ‘The risk to the NHS of industrial action this winter is profound, and we all need to do all we can to avert industrial action in any form. The NHS across the UK continues to feel the effects of the pandemic as it recovers and remobilises, and any action is likely to have catastrophic effects in all parts of the UK.

‘We are experiencing a cost of living crisis and the anger of NHS staff is entirely understandable. Sky-rocketing inflation combined with high interest rates, a direct result of the havoc caused by the UK Government’s mini-budget, means that we are simply unable to come close to matching the expectations of NHS staff across the country. While the support provided by the UK Government on areas such as support for energy bills is welcome, it has not gone nearly far enough.

‘Media reports suggest that the Chancellor is considering reimposing austerity on the people of the UK again, for which there is no mandate, through extensive spending cuts. That would be a disaster for our public services, including the NHS, at a time when they need more investment, not less.

‘We would therefore implore you to work with us to make the case to the Chancellor in advance of his Autumn Statement for increased funding for the NHS and the devolved governments as a whole, primarily to pay our hard working NHS staff a fair pay rise in the face of the cost of living crisis this winter, and avoid what could be catastrophic industrial action in the NHS.’

However, Nicky Hughes, associate director of nursing (employment relations) at RCN Wales, said that more money from Westminster alone will not avoid a nurses’ strike. Ms Hughes told Nursing in Practice: ‘Any money that comes from the UK Government is very welcome but we cannot rely on that alone.

Furthermore, Ms Hughes said that Welsh health minister Eluned Morgan has not responded to their requests to enter into negotiations. Ms Hughes called on the Welsh Government to ‘come around the table, identify some money, and to negotiate an improved pay award for nurses’.

Likewise, Colin Poolman, RCN Scotland director, said that it would require action from the devolved government to avoid an NHS strike: ‘How much nursing staff are paid and where the money comes from is a political choice the Scottish government needs to make.

‘For too long the Scottish government has relied on the good will of nursing staff, ignoring our concerns about safe staffing and failing to recognise our essential contribution to Scotland’s health and social care services. Strike action always should be a last resort, but the current NHS staffing crisis is causing unacceptable risk to patients and staff.’

A UK government spokesperson said: ‘We are investing record amounts in health and social care and the Chancellor has been clear that protecting public services like the NHS is a priority.We are hugely grateful for the hard work of NHS staff, including nurses, and that’s why we accepted the recommendations of the independent NHS Pay Review Body in full and have given over one million NHS workers in England a pay rise of at least £1,400 this year. This is on top of a 3% pay increase last year when public sector pay was frozen and wider government support with the cost of living.’