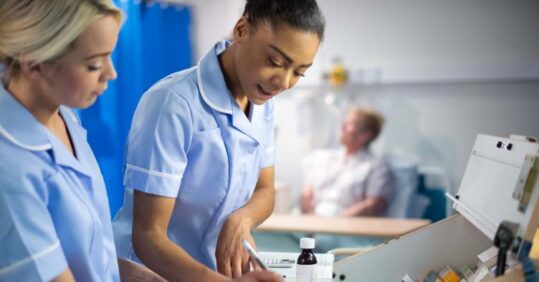 More nurses than ever are considering quitting the profession, largely because of pay, a Royal College of Nursing report published on Friday has revealed.

More than a third (36%) of 42,000 RCN members surveyed in May said they were thinking of leaving their jobs, up from 27% at the end of last year. Of those considering quitting, 61% cited pay as a factor.

Other factors driving nurses to consider leaving included the way they have been treated during the Covid-19 pandemic (44%), low staffing levels (43%), and lack of management support (42%).

She continued: ‘The Government must take steps to retain the nursing staff we have, as well as to increase entry into the profession.’

The report said the surge in those wanting to leave was ‘a serious cause for alarm’ as there were already around 40,000 nursing vacancies in the NHS in England alone.

A third of NHS respondents said they were ‘working a higher level of responsibility’ during the pandemic, while in both social care and private health providers, four in 10 were working at a ‘higher level’.

However, workers in the vast majority of sectors were not being paid for this extra responsibility, the report noted.

Dame Donna continued: ‘Investment in staffing and pay is about both patient safety and the health of our workers. That is how to strengthen all NHS and care services to help keep patients safe.’

The findings were the first released from the RCN’s Building a Better Future member survey, on how the professional lives of nurses have been changed by Covid-19.

Last week, nursing leaders warned that a 15% rise in nursing degree applications was ‘not enough’ to fix staffing shortages.

The Nursing and Midwifery Council also warned that a record annual growth in its register may not be sustainable after Covid-19 because of a reliance on overseas nurses.

This month, the RCN and other unions called on the Government to build on public support for the NHS by giving healthcare workers across the UK an early pay rise.