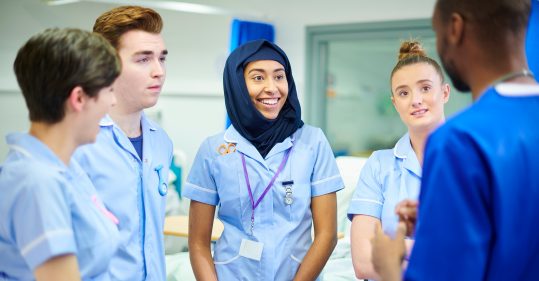 A temporary register for student nurses in the final six months of their programme will not be necessary, the Nursing and Midwifery Council has announced today.

A temporary register for student nurses in the final six months of their programme will not be necessary, the Nursing and Midwifery Council has announced today.

The NMC put forward the idea of a temporary part of the register for student nurses in March, but NMC chief executive Andrea Sutcliffe has now said the ‘phenomenal response’ from student nurses stepping up to tackle coronavirus has meant the health and care system ‘hasn’t been overwhelmed’.

Nearly 19,500 third-year student nurses and midwives, as of 17 April, have taken up paid placements on the NHS frontline while more than 13,000 former or overseas nurses and midwives are either working already or are on standby to assist.

NMC chief executive Andrea Sutcliffe continued: ‘The concerted efforts of so many people have meant our health and care system hasn’t been overwhelmed in the way we initially feared, although a long road remains ahead.

‘For all these reasons, it will not be necessary to invite nursing students to join the temporary register in the final six months of their education programmes.’

In a statement released today, the NMC added that fewer retired professionals on the temporary register have been redeployed than expected and that it is working ‘to support these people who are waiting to return to practice’.

The NMC did not say why fewer than expected former nurses had returned to practice or how they were supporting them.

The regulator set up a temporary register for nurses and midwives who retired from practice five or more years ago to return to the front line.

It continued: ‘With all of this in mind, it would not be appropriate to significantly expand the temporary register by inviting nursing students to join it.

‘We have arrived at this decision after very careful consideration of the needs of health and care services in all four countries; taking advice from the four chief nursing officers and their teams; and mindful of the expressed views of students, universities and their respective representative bodies.’

Student nurses and midwives were invited in March to complete the last six months of their programme as a clinical placement paid at Agenda for Change band 4.

Meanwhile, second year students and those in their first six months of final year were told they could opt to undertake extended clinical placements during the Covid-19 outbreak, paid at band 3.

However, not all students supported the decision to call on undergraduates to help tackle to the coronavirus.