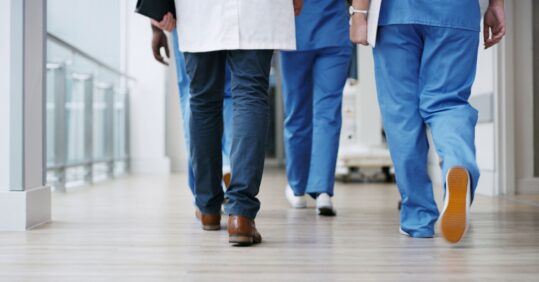 The supply of nurses into the NHS is not keeping pace with demand, analysis of NHS data by think tank the King’s Fund has found.

The analysis suggested that although the NHS is on course to hit 50,000 more nurses by March 2024 – a government manifesto pledge from 2019 – this is having no substantial impact on the number of vacancies or on the shortfall of nurses in the NHS.

‘This analysis shows the government risks hitting the target but missing the point,’ said Jonathon Holmes, policy adviser at The King’s Fund and who conducted the analysis. ‘The supply of nurses may have increased, but so too have the demands on the NHS – there are still substantial shortages, with 40,000 nurse vacancies.’

The report said this trend was not explained by worsening retention rates, as data showed that the proportion of nurses leaving the NHS had remained steady throughout the Covid-19 pandemic – therefore, the problem was that demand for nurses has been increasing more quickly than supply.

It said that, despite making good progress towards the 50,000 target, and although the pandemic and new targets to increase diagnostic and elective activity had created new demands and exacerbated the workforce shortages, the problem pre-dated Covid-19.

‘It has been too easy for successive governments to duck the health and care workforce challenge. The regular publication of workforce supply and demand projections would create the much-needed impetus to tackle the staffing crisis,’ said Mr Holmes.

‘The NHS and social care workforce crisis long pre-dates the Covid-19 pandemic. It follows years of poor planning, weak policy, and fragmented responsibilities. Government efforts to recruit more staff are welcome, but unless the targets are based on the expected increase in demand for health and care services, they are unlikely to solve the staff shortages that have hamstrung the NHS and social care for years.’

The regional picture was also more complex: the south east, south west and east of England have increased their nursing workforce numbers at a significantly higher rate than Greater London, the Midlands and the North East and Yorkshire.

The King’s Fund called for a regular assessment of demand for and supply of nurses in the NHS to assess any shortfall or surplus to allow the NHS to adjust its workforce and activity plans accordingly.

It also warned that without this, long-term workforce shortages would continue and demands on the NHS would grow more severe. However, MPs voted against an amendment to the Health and Care Bill to grant greater transparency around workforce numbers in the NHS again yesterday.

Mr Holmes added: ‘Just one in four NHS employees now feels there are enough staff in their organisation for them to do their job properly, and the public now cite workforce shortages as the second most common reason for dissatisfaction with the NHS. It is time for ministers to also recognise the workforce crisis as a priority.’

Despite the overall increase in nurse numbers, figures published last month revealed the numbers of nurses in GP settings have seen no growth from 16,352 FTE nurses in September 2019 to 16,351 in December 2021 and health visiting numbers dipped from 6,981 to 6,194 in the same period.