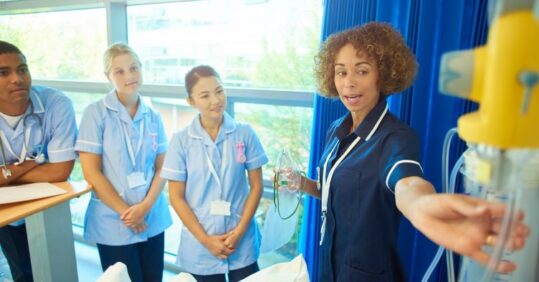 At least 6 million nursing jobs must be created globally, according to a landmark report released as nurses carry out vital work in tackling the coronavirus pandemic.

State of the world’s nursing 2020, a report from the World Health Organisation on Monday, warned that a minimum of 5.9 million more nurses were needed to fill current gaps in the 29-million workforce.

The document said that the world’s ‘emergency preparedness and response capacity is being tested’ by the Covid-19 outbreak.

It continued: ‘Now, more than ever, the world needs [nurses] working to the full extent of their education and training.’

It said that countries should increase the number of nurse graduates by 8% each year and invest in nurse education to offset the global shortage by 2030.

The report also urged governments to help strengthen nurse leadership to ensure nurses have an ‘influential role’ in health policy and decision-making.

It found that around nine in ten nurses are women but few leadership positions are held by either nurses or women.

The document went on to recommend that countries that are ‘overreliant on migrant nurses’ should invest in developing their domestic workforce.

It continued: ‘Nurse mobility and migration must be effectively monitored and responsibly and ethically managed.’

WHO director general Dr Tedos Adhanom Ghebreyesus said ‘nurses are the backbone of the health system’.

He continued: ‘This report is a stark reminder of the unique role they play and a wakeup call to ensure they get the support they need to keep the world healthy.’

The report was developed in partnership with the International Council of Nurses and the global Nursing Now campaign.