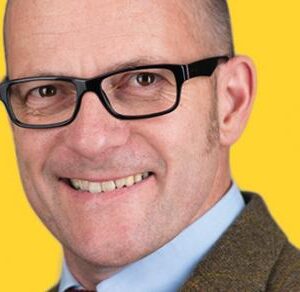 In February 2012, after a day of heavy drinking and argument, he dialled 999 and said ‘I need an ambulance, I’ve just stabbed my girlfriend’.

I know a lot of nursing staff, in fact I’ve been to Uganda with a dozen nurses and medical staff to help a charity provide healthcare to a number of villages outside Kampala.

So although I know nurses are kind, caring and amazing – I know they can be scary too. And yet on 7 November 2017 I stood in front of 200 nurses to speak to them about domestic violence.

At the Nursing in Practice Conference at the NEC Birmingham I gave the keynote speech on the subject.

Specifically, I was telling Sarah Gosling’s story. Sarah was brought up in Buckinghamshire before moving in her early 20s to Norfolk with her husband. By the early 2000s they had two children and ran a pub as well as a car repairs business.

In a late-night move in 2010, Sarah left her family and went to live in the North East with her partner Ian Hope – riding through the night on his motorbike.

They moved in together and were happy – both working and setting up home together.

After a few months, arguments started and during one of these altercations, Ian hit Sarah with a torch. The police were called.

Despite support from a multi-agency team and Women’s Aid, Sarah decided to discharge herself from their support during late 2011.

Ian and Sarah continued to fight, his attacks became more frequent and following a Christmas Day where he hit her over the head with a wine bottle, she was hospitalised in January 2012 when Ian split her head open with a rolling pin.

On 14 February after more violent incidents, Ian was charged with common assault and they were ordered to live separately – which they managed for two or three nights – and Ian started anger management classes on 22 February.

A few days later, after a day of heavy drinking and argument, Ian dialled 999 and said ‘I need an ambulance, I’ve just stabbed my girlfriend’.

Sarah Gosling was my sister.

In my talk at the NEC for NIP I shared some statistics:

As well as pondering why that these deaths are largely unreported in the national news, I reflected on what the nursing profession can do to help women in danger through domestic abuse.

As a frequent ‘first port of call’ for women experiencing domestic abuse, nurses are a key profession in highlighting and possibly signposting women who are being abused in their own homes.

As an example of clever safety planning, one nurse told me of a scheme whereby lip-balms were issued to women with the emergency Women’s Aid number concealed as a bar code.

Which leaves me with one question – what are YOU going to do to help women to gain support if you suspect or know they are facing domestic abuse or violence?

Find Bernie on Twitter at @EnterpriseSBox and online at innovativeenterprise.co.uk.