100 editions of Nursing in Practice

Nursing in Practice is born. Marilyn Eveleigh, the then editor and now advisory board member,  describes it as a magazine for nurses working ‘in and around primary care’, with the intention of ‘actively  and vigorously promoting and supporting the profession’.

The Nursing and Midwifery Council (NMC) takes over nursing regulation from the United Kingdom  Central Council for Nursing. The following month, Lynn Young, the Royal College of Nursing’s  community health adviser at the time, encourages practice nurses to discuss their career aspirations.

The new General Medical Services (GMS) contract is introduced and along with it, the Quality and  Outcomes Framework. The latter sees more GP practices hiring professionals other than doctors and  nurses – such as healthcare assistants – which allows practice nurses to focus more on patients  with chronic conditions.

Announced in 2003, Agenda for Change finally comes into force after many delays. Despite giving a  clear pay structure, this isn’t mandatory for nurses in GP surgeries, leading to a wide variation in pay for  practice nurses. 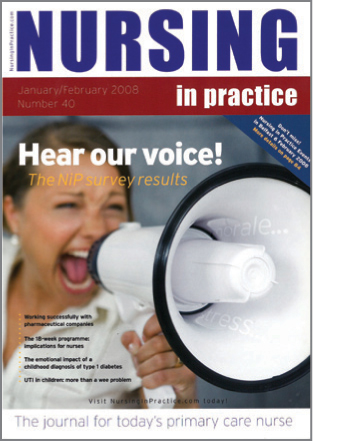 Our survey reveals that 20% of practice nurses describe their morale as ‘slightly worse’ compared with  how they felt before the introduction of the GMS contract in 2004. But just shy of 90%
would still recommend primary care  nursing as a career option.

The NHS Workforce Review Team (WRT) identifies problems with the future of general practice  nursing that will hit home years later. WRT claims the practice nurse population is ageing, while the  ‘capacity of the system to fast-track newly-qualified nurses into primary care is growing slowly’.

The Care Quality Commission is established with the goal of ensuring that services in primary care are  safe and regulated through a consistent cycle of inspections.

The Government makes nursing a degree-only profession, meaning other qualifications, such  as diplomas, will no longer allow a prospective student to qualify as a registered nurse.

Health Education England (HEE) publishes its educational framework for practice nurses. HEE’s aim is to  give a clear career progression for general practice nurses, starting at level 5 for a newly-qualified  practice nurse, up to level 8 for an advanced nurse practitioner.

NMC regulation changes to introduce revalidation for nurses and midwives. They are now required to  produce written reflections on their practice and have a reflective discussion with a fellow nurse, in  addition to completing their practice and CPD hours.

Having been announced in November 2015 by HEE, we examine how the new nursing associate role will  fit within general practice, and the nursing profession in general. Unison brands the idea as ‘nurses on  the cheap’.

NHS England’s 10-point action plan for general practice nursing looks to address the recruitment and  retention issues for nurses in primary care. We ask whether, almost 10 years after the NHS WRT  identified issues with the practice nurse workforce, the plan has come too late.

Editor David Swan takes a look back through the years with the first 100 editions of Nursing in Practice.