It’s been eight long, austere years since NHS pay was capped. Now NHS staff in England, including community and district nurses, could receive a pay rise of between 6.5-29% over three years after NHS employers and unions agreed a new pay deal for its members to vote on.

All 14 unions on the NHS Staff Council, who represent Agenda for Change members, have been part of the negotiating process on this proposal.

After nearly four months of complex negotiations the proposals on offer to members were announced in March. Helga Pile, Unison’s deputy head of health, believes the proposals achieve ‘the key reforms to the Agenda for Change pay structure that we have long argued for, including better starting salaries and getting staff to the top of bands more quickly’.

Unions have been putting the deal to their members via consultations. Nurses must be a member of one of these unions to vote on the pay deal during the consultation period. 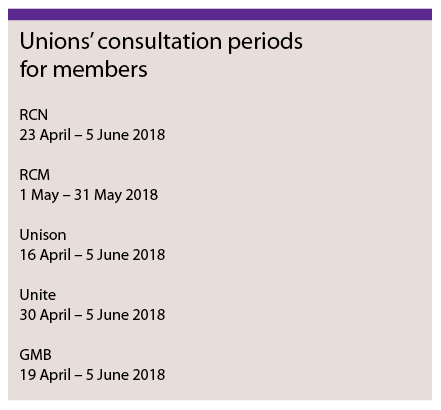 Whether nurses accept the deal or not will be influenced by what their unions advise them during the consultation. Nursing in Practice spoke to representatives of the five main unions representing nurses and midwives, who have outlined key themes for the profession to consider when weighing up their vote.

The proposed deal could be viewed as a ‘good news’ story for nurses because it busts the 1% pay cap. ‘At long last, after eight years of pay austerity, there has been a significant recognition that this harsh pay regime imposed on hardworking and dedicated NHS staff can no longer be sustained,’ says Sarah Carpenter, Unite national officer for health, who led the union on its pay talks.

She says Unite’s national health committee is recommending that its members accept the deal ‘as the best that can be achieved at this time’.

‘We know that it does not make up for the years of pay restraint in the NHS that the Government have inflicted on staff, but it is a significant step on the journey,’ she told Nursing in Practice.

The Royal College of Nursing’s (RCN) trade union committee has also decided to recommend that members accept the proposals. ‘The RCN believes this proposed pay deal is the best that can be negotiated.

‘It’s not a “cure all” and won’t resolve everything. But it’s the best deal we’re going to get from an austerity government,’ says Josie Irwin, the RCN’s chief negotiator for the pay deal and associate director of employment relations.

Ms Irwin believes the ‘headline increase for everybody of at least 6.5% over three years provides certainty [during that period] at a time when there is a good deal of economic and political uncertainty, particularly with Brexit looming’.

The board of the Royal College of Midwives (RCM) is also urging members to vote ‘yes’ to the proposals as ‘it’s the best offer in the public sector at the moment without any doubt,’ says Jon Skewes, the RCM director for policy, employment relations and communications, and one of the chief negotiators of the proposed pay deal (see Debate, page 18).

A boost to the lowest paid

During a time of austerity, another benefit of the proposed deal is its potential to increase income for those who are the lowest NHS earners. ‘We especially welcome the boost for the lowest paid in the NHS. It has been right to strongly focus on addressing the issues of those who are paid the least, but who have struggled the most to cope with the savage impact of austerity,’ says Ms Carpenter.

The proposals include the removal of overlaps between bands to increase starting and promotion pay. Unison believes the proposed deal will make the whole pay system fairer. ‘As well as annual increases, major structural reforms will mean an increase in starting salaries in every band, and more staff getting to the top of their band quicker than they would under current arrangements,’ says Ms Pile.

Ms Pile’s noting of the quicker pay band progression is the result of a decrease in the number of incremental pay points in bands under the proposed deal, making it quicker for nurses to reach the rate for the role. By removing pay points, the three-year deal would put 85% of existing staff at the top of their pay bands, Ms Pile explains.

By increasing starting rates for all new joiners to the NHS at all grades, Ms Pile believes the NHS will be a ‘more attractive prospect for new recruits’, helping to ‘ease the pressure on existing staff struggling to cope with increased demands on services.’

Unique to the public sector is a commitment from the Government to fully fund the pay deal to the tune of £4.2bn over the next three years. Ms Carpenter stresses that ‘this is a fully-funded deal — “new” money, so it is not finance that is being taken away or diverted from cash-strapped NHS services’.

‘This is something, we believe, the Government should have done a long time ago — and they should do so now for other public sector workers who have endured a similar rigid pay policy,’ she adds.

Ms Carpenter claims that because the suggested pay deal is being funded with additional money ‘no employer will argue that they have to cut patient care to pay staff’.

However the GMB, which is advising members not to accept the deal (see page 18), questions whether or not this funding will be provided for the full three-year period. Kevin Brandstatter, national officer at the union, says the funding of the deal can only be guaranteed for one year because there is a comprehensive spending review in the second year of the deal. ‘The Government undertakes the review every three years and it will determine how much money actually gets spent on the NHS,’ he says.

With trusts having ‘massive deficits around their necks, which they are told they must reduce’, Mr Brandstatter says the union’s representatives are not convinced that all the funding of the pay deal will go to staff.

Inflation is another consideration for nurses looking at the value of the proposed pay deal. But views on and predictions about inflation vary widely, and whether it rises or falls over the next three years is difficult to determine. The RCN and RCM view the deal as helping to close the gap between where nurses’ pay should be and inflation, which fell in January for the first time since June 2017.

But Mr Brandstatter says there are predictions that inflation will rise by at least 9% over the next three years, making the proposed average pay increase below the cost of inflation, and he suggests the potential impact of Brexit could make inflation rates even higher.

Like inflation, the outcome of the pay proposal is unpredictable. Unions are now holding meetings with their members to talk to them about details of the deal and will be responding to their queries.

Ms Carpenter says Unite has ‘held many meetings with our members – with many more planned – to talk through the many parts of this proposal, including the changes to pay progression and the higher starting salaries for all pay bands.

‘We are also dispelling the myth that there are any cuts to annual leave,’ she says.

Ms Irwin says there has been a ‘mixed reaction’ from RCN members to the proposals. ‘Some members who are very articulate on social media have been sceptical and not happy about the 6.5%, as they wanted more.’

But she points out that ‘speaking to members on the front line, it’s clear they accept something needed to be done about recruitment as well as retention’, and while the proposed deal is not as much as they would like, ‘nevertheless it’s better than they might have expected’.

A lack of clarity

While 13 out of the 14 unions associated with the deal support the proposals overall, the GMB has been talking to its members since 15 April to discuss why, according to Mr Brandstatter, ‘we don’t believe this is an adequate pay increase’.

He says the GMB is meeting with NHS staff throughout country and ‘making sure they get round to as many of our people as possible to explain to them what we’re unhappy with’.

But once the votes are in, there seems to be a lack of clarity among the unions about what happens next. As to how the voting process will work – such as what will happen if a majority vote rules and whether it would mean the pay deal comes into force in July – the picture is as yet unclear.

All 14 unions will consider the results of their members’ votes and this will inform their decision to accept or reject the deal. ‘Hopefully we’ll be able to reach a consensus. The health unions work together very co-operatively, and 13 of us think it’s a good deal,’ says Mr Skewes.

However, Mr Brandstatter says that while previously disagreements between unions around pay have meant those with the weight of numbers behind them have seen their view prevail, this time ‘things are different’.

‘We have hundreds of people voting to join us to debate [the proposed deal] and there are no rules about how we address this. We’re not worried about being a lone voice,’ he says.

And if one union returns a ‘no’ vote, he says: ‘We don’t know what will happen – we’re in unchartered waters.’

If the unions agree to this pay deal, money will also be made available to the devolved nations of the UK. The amount will be decided by the Barnett formula, which takes the amount spent on public services in England and calculates an appropriate sum to filter through to the other UK nations. It will then be down to the unions in each of these countries to agree a pay deal with the respective
NHS employers.

Whether nurses decide to vote for or against the proposals, some unions feel while the suggested deal is not ideal, it’s a start, and that they have done their best to get the best outcome.

As Ms Pile says: ‘The proposed deal is not perfect, but it’s a step in the right direction. Health unions deserve credit for changing the story so that now, instead of continuing to fight against the hugely damaging 1% cap, NHS staff have a real choice to make.’ 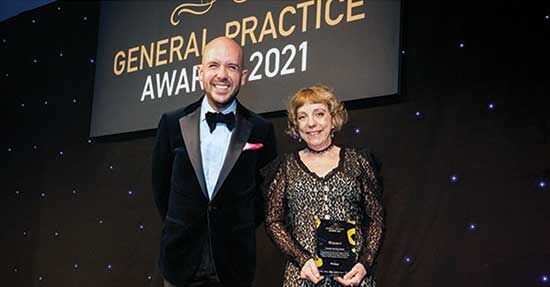 It’s been eight long, austere years since NHS pay was capped. Now NHS staff in England, including community and district nurses, could receive a pay rise of between 6.5-29% over three years after NHS employers and unions agreed a new pay deal for its members to vote on.