Practice nurses can do more to combat AF-related strokes 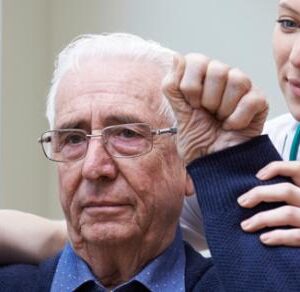 Every 15 seconds someone suffers an atrial fibrillation-related (AF) stroke. One in five strokes in England is estimated to be caused by AF, and stroke risk increases five-fold in those with the condition.

AF-related stroke risk can be reduced by 64% with appropriate anticoagulation treatment,1 whether this is with warfarin or the newer direct oral anticoagulants. In England, only an estimated 45% of stroke victims with known AF prior to their stoke are anticoagulated. Around 7,000 strokes could be prevented and 2,000 lives could be saved in England each year if there was optimal anticoagulation in AF. 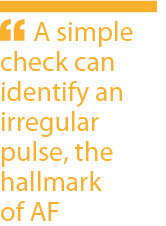 In a recent international white paper, the Economist Intelligence Unit gathered data from 20 countries.1 One key finding was that there were insufficient screening practices for AF. Perhaps the most startling statistic in this paper is the rate of screening for AF in the UK compared with the other 20 countries. Countries with the best rates of AF screening are Russia (42%) and China (36%). In the UK, we have an 8% screening rate, making us second to last.

These statistics are alarming. Practice nurses can play a central role to fight AF-related stroke by doing three things.

The first is opportunistic screening. Patients are regularly reviewed for stroke risk factors, so a simple manual pulse check at these reviews can identify an irregular pulse, the hallmark of AF. An ECG can confirm AF, followed by anticoagulation in those with a CHA2DS2VASc of 1 or greater.

I recently saw a national expert speak to our local GPs on anticoagulation in AF. There were two points he made that stuck with me. He told us about an elderly, independent woman with known AF who attended A&E. Anticoagulation was stopped because of a minor bleed. The relevance of this decision was never reviewed in primary care. Six months later she suffered a disabling AF-related stroke and was discharged to a nursing home with a PEG feed where she died three months later. The second take-home point was that anticoagulation is under-prescribed because of concerns about bleeding. The response to this is simple — you can replace blood, but you can’t replace dead brain tissue.