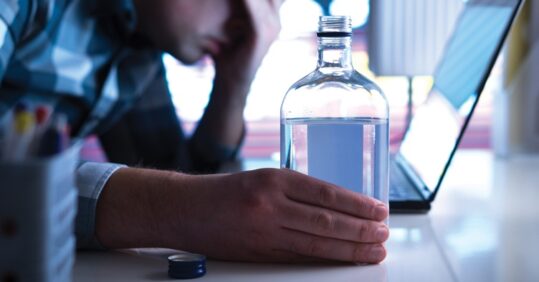 Allie Anderson looks at the soaring incidence of high-risk drinking during the pandemic and considers how primary care can respond when services already pared to the bone face further pressure from the Covid backlog.

In September 2020, the Royal College of Psychiatrists warned that health services were not adequately equipped to manage the rise in demand for alcohol addiction treatment that had resulted from the Covid-19 pandemic.

The college conducted an analysis, which found that 8.5 million people in England were drinking at ‘high risk’, an increase of 77% from 4.8 million in February, before the first lockdown.1 It also reported that the number of new cases of opiate addiction in April 2020 was 20% higher than in the same month in 2019.

Six months after the RCP report, the picture remained equally concerning. Public Health England data revealed that, in the year from March 2020, there had been a sharp rise of almost 59% in the number of people who were drinking at ‘increasing risk’ and ‘higher-risk’ levels2 (risk is measured by the WHO’s AUDIT screening tool3, see table below, with a score of 8 to 15 indicating increasing risk and a score of 16 to 19 denoting higher risk).

General practice is typically the first port of call for people with addiction problems, whether they are substance related – like alcohol, drugs or tobacco – or behavioural, such as gambling. Nurses and GPs are faced with managing patients, whose addictions are often accompanied by other, often complex, mental health problems.

Practice nurses are ideally placed to provide brief interventions and advice for substance misuse, because they can screen patients opportunistically in the same way they do for smoking and weight. This works particularly well with patients who misuse alcohol.

A patient who drinks alcohol at ‘increasing’ or ‘higher’ risk levels – as identified by recognised screening tools such as AUDIT – can often be counselled to lower their risk.

In some cases, education around alcohol consumption and advice on how to swap drinks to reduce unit intake is sufficient to bring about behaviour and lifestyle changes, explains Dr Margaret Orange, associate director for addictions governance at Cumbria, Northumberland, Tyne and Wear NHS Foundation Trust.

‘Often, people don’t realise that alcohol is a problem until they are asked about their drinking,’ she says. ‘Explaining to someone that you’re asking how much and how often they drink as part of standard questioning about their health status is less stigmatising, too.’

Research shows screening and brief intervention like this can be effective in supporting people with addiction in primary care settings.4

Where patients present with physical comorbidities or complex psychosocial problems, these should be considered as part of the initial screening and assessment. It’s important to make patients aware of the manifold physical damage that can be caused by alcohol misuse, but that advice sometimes lacks impact.

‘Unless the patient has come in with a physical health problem, messages about physical harm can be meaningless because they think it’s a bit ethereal – that those harms won’t happen to them for years,’ Dr Orange adds.

Nurses must therefore tailor their advice by tapping into what’s important to each individual. For example, if a patient relies on driving for a living, reminding them they risk losing their license if they are caught under the influence could be the prompt they need to cut down.

Similarly, a young person who’s worried about their sexual health is more likely to respond to advice around relationships and sex, and the impact high-risk drinking can have on those aspects of their life, than to being told they risk developing a fatty liver in the future. ‘It’s about finding that one thing to latch on to that would be most meaningful for that patient to make changes at that time,’ Dr Orange says.

However, when it comes to more complex addictions, and addictions to substances other than alcohol, it’s less straightforward to manage patients in primary care.

Pamela Walters, clinical director at addiction charity The Forward Trust, explains that changes in the way addictions are managed, together with budget cuts, have hamstrung primary care addiction and substance-misuse services.

‘Historically, primary care services used to offer shared-care models for patients with substance-misuse needs. This meant patients could be shared between specialist services and primary care,’ she says. ‘As funding for addictions services waned, specialist services are unfortunately no longer available from GP practices, and the expertise of addictions management was lost from swathes of primary care settings. There are still some practices with an interest in addiction, but far fewer now funding has been taken away.’

Processes that would help primary care are also lacking. For example, no standardised tool exists to screen for opiate harm. While it is possible to offer some brief advice and signpost a patient to local support services, an immediate referral to specialist care is usually recommended, according to Dr Orange.

‘There is good evidence that you can bring someone off opiates very quickly with substitute prescribing, but most primary care settings do not have the expertise to manage opiate addiction.’

NICE guidelines recommend methadone and buprenorphine as substitutes in the management of opioid dependence5, but say these should be given under supervision and as part of a programme of supportive care. ‘A separate medical service covering prescribing, psychosocial support, bloodborne virus services and psychological support across most areas is provided by specialist drug and alcohol services,’ Walters adds.

Many factors determine when a referral is needed, including the duration, severity and nature of the addiction, as well as the expertise in the practice. ‘Counsellors within practices are often equipped to manage the mental health problems experienced by someone at a lower level of addiction, like depression, anxiety and grief,’ Walters says.

‘But interestingly, for those with a depression or anxiety disorder, the recommendation is that the alcohol misuse should be treated first.’

This creates unnecessary barriers, she adds, leaving many patients with complex needs without support when they need it most. In addition, access to specialist care is patchy and local referral pathways are not always clear, partly due to public services being curtailed by sustained cuts.

According to recent figures, real-terms local authority spending on services for drug and alcohol misuse fell by 15% over the four years to 2019/20 – and four local authorities slashed their budgets by more than 40%.6

The situation is likely to worsen, as delays and backlogs caused by the pandemic begin to filter through, and more patients start to present who did not access services during lockdowns – although in many places those services remained open.

‘In many trusts – including mine – those services did not close,’ Dr Orange says. ‘Although we put plans in place to reduce the footfall, we always retained the option for face-to-face contact with patients if we had concerns.’

Where practices nurses do not have access to clear referral pathways, providing extended brief interventions, along with signposting to agencies like AA, Narcotics Anonymous UK, or other community-based support, can be the best alternative.

In cases of severe dependence, or where there is a history of acute withdrawal or seizures, poly-drug use, psychiatric or cognitive needs, or immediate physical problems such as malnourishment, admission to hospital for inpatient detox might be necessary. ‘This might also include those with unstable or unsupportive home environments.’ Walters adds.

While the long-awaited second part of Dame Carol Black’s Independent Review of Drugs7 made some welcome recommendations – a government injection of £552m to overhaul the treatment system, for starters – it may be inadequate to plug the ever-widening gaps.

‘If we want to make a difference, there needs to be funding across the board,’ Walters warns. This would facilitate clearer pathways and more joined-up working between practice staff and specialist colleagues.

‘Practice nurses require the support of the wider multidisciplinary team to ensure a proactive, consistent approach in creating change and securing positive outcomes for those seeking recovery,’ she concludes.

While assessing, managing and supporting patients in general practice, the following principles should be applied:

Be empathic and non‑judgmental to build a trusting relationship.

Be aware that patients often minimise their problems to avoid stigma.

Give information appropriate to each patients’ understanding, to support individual choice of evidence-based treatments.

1. Addiction services not equipped to treat the 8 million people drinking at high risk during pandemic. London: Royal College of Physicians, 2020.

4. Screening and brief interventions for hazardous and harmful alcohol use. Geneva: WHO, 2012.

5. Methadone and buprenorphine for the management of opioid dependence. London: NICE, 2007. nice.org.uk/ta114