Explained: Do rising vacancy rates mean there are fewer nurses? 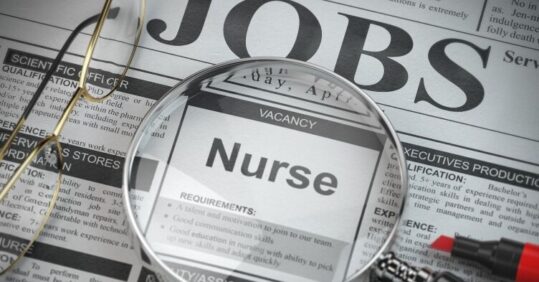 Data this month from NHS Digital revealed what appeared to be a worrying trend in the NHS workforce in England: the vacancy rate for nurses in the community, as well as for all nurses roles, has continued to grow.

It revealed that 12.8% of all community nurse positions were vacant, as of September 2022. This is a 20% increase in vacancy rates than in the same time period a year before when one in ten positions were unfilled, rising from 1,842 to 2,430 unfilled posts. It is also higher than the overall current nursing vacancy rate of 11.9% – equivalent to 47,496 roles, up from 39,931 at the same time last year.

But what does this actually tell us about the NHS workforce? Should we be concerned that more posts are unfilled – or do these figures only tell part of the story? Nursing in Practice spoke with some of the UK’s leading workforce experts and sifted through the data to find out.

Do rising vacancy rates mean there are fewer nurses?

David Maguire, senior analyst at the King’s Fund, says that as a result of this methodology, vacancy data can give ‘a good idea of the level of shortage relative to what’s funded, but not necessarily the gap between staffing levels and demand’.

He continued: ‘The overall NHS funding envelope is set by a political process, not one that starts with the level of need in the country for health services. That means that during a period of particularly low funding increases (such as the last 12 years), the number of roles you can afford to advertise can slip below the number you need.’

This means that the vacancy rate is not necessarily the best indication of how well-staffed the NHS is in reality. In fact, the real vacancy rate – compared to what the system needs – could be even starker than the data suggests.

Professor Alison Leary, chair of healthcare and workforce modelling at South Bank University, explains: ‘The key is that vacancy rates are not a reflection of actual demand for nursing care, which is likely to be much higher.’

Another puzzle is that the vacancy rate is growing even while record numbers of doctors and nurses are working in the NHS. This is likely because although there are more nurses than ever, the planned workforce is also higher than ever – meaning current recruitment levels are falling far short of what is desired.

A Department of Health and Social Care spokesperson said that, despite record vacancy rates, there were ‘record numbers of staff working for the NHS, including 9,300 more nurses and almost 4,000 more doctors compared to September 2021’.

The Government’s own explanation for the rising number of vacancies is that ‘the overall number of available posts is increasing as we expand services to bust the Covid backlogs and provide the best possible care to patients’.

William Palmer, senior health policy fellow at the Nuffield Trust, agrees that ‘trying to increase the workforce will inevitably increase the apparent vacancy rate as some roles will have yet to be recruited’. He adds: ‘This is why those vacancy rate figures aren’t great. I’m afraid, like most things, there’s no single good measure.’

Without additional data -such as an accurate count of the total number of staff, or records of care quality and performance – it can be hard to tell what an increase in the vacancy rate means; whether it is a sudden increase in funding for posts from the Government, or an actual reduction in the size of the workforce.

What can vacancy data tell us about the NHS workforce?

Mr Maguire from the King’s Fund said that clues can be found in trends in the vacancy rate. While a sudden spike in vacancy rates might suggest a boost to investment, he argues that because the trends show the vacancy rate staying high for prolonged periods, this could mean the sector is struggling to recruit and retain.

‘If the vacancy rate is rising due to an expansion of the level of resources available to the sector, that’s good. Unfortunately. that’s not the context the NHS finds itself in,’ he explains.

‘Retention is starting to become a challenge, with people who have held off retirement ending their careers in the sector and others burning out because they’ve been working so hard for so long to cover shortages. That’s leading to a vacancy rate that’s trending upwards, despite large expansions in international recruitment from non-EU countries.’

The vacancy rate can also be used to compare different specialisms and geographical regions where, in some cases, it remains worryingly high.

As in previous years, mental health nurses seem to be most in demand with almost a quarter of all positions unfilled in the South East of England and in London, a slight increase on previous years.

So, while consistently high vacancy rates can tell us that something may be going wrong in the NHS workforce, given the Government’s plans to expand the workforce it can be difficult to find real insight. As always, it is better to approach the data with caution, and realise that it may not tell the full story.