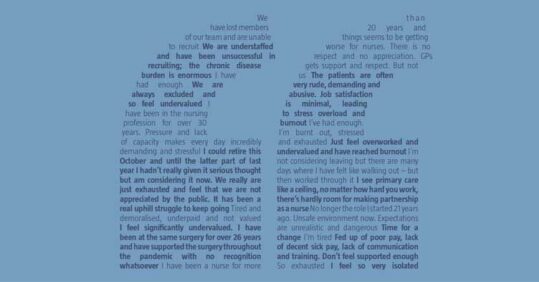 We ask nurses working in general practice about workload, staffing and morale, and how they feel as they look towards the immediate future

Pandemic-era policies ended on 24 February, as Prime Minister Boris Johnson set out plans for ‘living with Covid’. But practice nurses know more than anyone that the pandemic and its impacts are far from over. Now, they must face the Covid aftershocks – such as burnout among staff and a daunting backlog of care. In a survey that ran from 26 January to 16 February, we asked 393 nursing staff (including 285 practice nurses, 65 nurse practitioners and 24 ANPs) in general practice across the UK about their thoughts on their current and future roles. How do they feel as Covid appears to lessen its grip?

When asked to explain why they were considering leaving, many said they felt exhausted, overworked and underpaid, with several citing frustrations with their variable pay, terms and conditions compared with those of other nurses on standardised NHS Agenda for Change (AfC) contracts.

Nurses also reported that staff shortages – driven in part by people leaving the profession – were impacting on workload and care quality. Just 33% said they had enough staff at their practice to do their job properly, with many blaming resignations, retirements and subsequent recruitment struggles. A director of nursing across multiple practices, based in the West Midlands, summed up the problem: ‘We have lost members of our team and are unable to recruit.’

Nurses cited a variety of tasks and activities as the main contributors to workload, many of which have been exacerbated by the pandemic. For example, several noted an increase in patient complaints. One practice nurse based in north-west England said that listening to patients vent during appointments – for example, about the ‘perceived lack of access to GP appointments’ or ‘delays/lack of communication between GP and secondary care’ – took up a ‘large volume’ of their time. Respondents also reported a rise in patients attending with multiple problems because they had not been seen during the Covid-19 pandemic.

Another effect of the delayed accessing of services is that many patients with long-term conditions have seen them deteriorate and become more complex, and some new diagnoses are only being spotted now. One practice nurse in south-west England explained: ‘Patients attending with multiple issues that they have had for long time, their symptoms are more complex and therefore more time is needed to treat them and complete referrals.’ Meanwhile, the Covid-19 vaccination campaign is ongoing, with the Government recently announcing another booster campaign for vulnerable patients in the spring.

• Nearly two-thirds (60%) of nurses in general practice say their job has changed for the worse since the Covid-19 pandemic began
• Most respondents are considering leaving their jobs next year, with just 33% saying they are not planning to move on
• The majority (78%) think the backlog in their practice will take six months or longer to clear

Backlog of care
Nurses are also dealing with the care backlog, triggered when general practice appointments fell by a third, from 24 million to 16 million between March and April 2020. The number of appointments being delivered has now risen dramatically, reaching 26.9 million in January 2022 (of which 1.2 million were Covid vaccinations).

But despite this hard work, catching up with the backlog remains a formidable task. When asked how worried they were about the backlog, only 6% of respondents said ‘not at all’ worried, while 10% said ‘a little’, and 26% said ‘a moderate amount’. Well over half (58%) said they worried ‘a lot’ or ‘a great deal’. And when asked to estimate how long it would take to clear the backlog, just 16% of respondents thought it would take less than six months. The majority said it would take at least six months, with 35% estimating six to 12 months, 29% saying 12 to 24 months, and 14% more than 24 months. Just 6% said their practice had ‘no backlog at all’.

Many nurses said they did not have enough staff to face rising patient demand, leaving little time to tackle the backlog – with several voicing particular fears about delivery of outstanding long-term condition reviews.  A practice nurse based in north-west England said their team felt as if they were ‘failing patients’ because ‘there aren’t enough hours in the day’. Another, based in the East Midlands, said: ‘We are so far behind with annual reviews of asthma, COPD and diabetes. Each month this backlog increases.’ A GPN based in Greater London agreed: ‘Due to staff shortages we only have enough appointments for current needs, so we don’t have capacity for reviewing all the chronic diseases.’ Another, based in Greater London, added: ‘We are understaffed… the chronic disease burden is enormous.’ However, one practice nurse based in south-east England said their practice did not have a ‘significant backlog’ after ‘working continuously through the Covid-19 pandemic’ to see patients for screenings and immunisations.

Dipping morale
Amid the rising demand, around half of respondents said they felt sufficiently supported by their employer either ‘always’ (14%) or ‘usually’ (32%), while 31% said just ‘sometimes’, 19% ‘rarely’ and 4% ‘never’.

Many complained that their employer lacked an understanding of what nurses do and their expectations were too high as a result. A nurse practitioner in Northern Ireland wrote: ‘Our workload has increased but this does not seem to be registering with management.’ However, several praised the good communication and flexibility of their practice. A practice nurse in north-west England summed up the variability across general practice well, saying their current employer was ‘very appreciative’ but this hadn’t been the case in previous surgeries where they had worked.

Meanwhile, most respondents either ‘always’ (15%) or ‘usually’ (56%) felt appreciated by their patients; 25% said this was the case ‘sometimes’ and 4% said ‘rarely’. No one said they ‘never’ felt appreciated by patients. Another practice nurse, based in Greater London, said patients were ‘mostly satisfied’ despite the ‘odd complaint’. But some nurses reported verbal or physical abuse. A practice nurse based in Wales wrote of ‘less respect from patients since restrictions in place to see GPs and nurses face-to-face, angry outburst in receptions, extreme rudeness on phone…’

Looking forward
Despite the pandemic appearing to lessen its grip, many respondents had a pessimistic outlook: nearly half either felt ‘negative’ (31%) or ‘very negative’ (13%) towards the next few months in general practice. Only around a fifth said they felt either ‘positive’ (18%) or ‘very positive’ (4%).

While Covid restrictions have been relaxed, NHS England said there would be ‘no immediate changes’ to infection prevention and control guidance in healthcare settings. In the survey, which was carried out before these announcements, respondents outlined some concerns about PPE, with 20% saying they were ‘not satisfied’ with the level and quality available. The British Medical Association recommended in January that general practice clinicians should use FFP2 masks ‘as a default’ when seeing patients – but just 45% of our respondents said they ‘always’ had access to FFP masks for face-to-face consultations, while 29% said they ‘never’ did, 5% said they ‘rarely’ did and 8% said they ‘sometimes’ did.

RCN professional lead for general practice nursing Heather Randle said our survey’s findings came as ‘no surprise’, particularly after the ‘huge pressures’ of the Covid-19 pandemic ‘against a backdrop of poor pay and working conditions’.

Ms Randle urged ministers to ‘urgently’ address the issues raised in the survey, including workload and staff shortages, warning that until they do, ‘health promotion and prevention will continue to suffer and unnecessary hospital admissions remain inevitable’. In addition, she raised the ‘key issue’ of variable pay, terms and conditions faced by practice nurses who are not on AfC contracts.

‘Staff feel undervalued and invisible, and it’s desperately sad but not surprising that many are thinking of leaving their jobs. Even before the pandemic, the system was under strain with not enough skilled nurses. Now it is in crisis,’ she concluded.