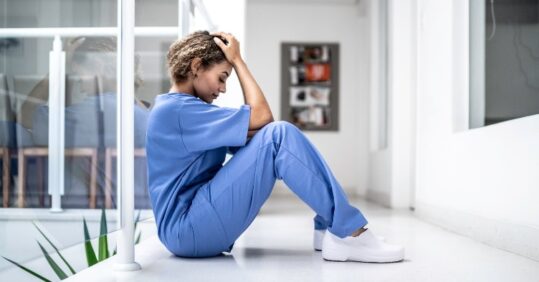 The impact on healthcare workers’ mental health after dealing with the Covid-19 pandemic will be ‘long-lasting’, the UK’s spending watchdog warned today.

Existing workforce issues in the health and social care sectors ‘added to the challenges of responding to the pandemic’, the National Audit Office (NAO) highlighted, in analysis of 17 of its own reports on the Government’s handling of the pandemic.

‘Given the stress that staff were experiencing before the pandemic, and the additional pressures caused by Covid-19, it is likely that the after-effects of responding to the pandemic will be substantial and, for some people, long-lasting,’ the NAO report ‘Initial learning from the Government’s response to the Covid-19 pandemic’ said.

‘Some registered managers in social care reported the mental health of workers was under massive strain, with individuals particularly concerned about getting ill and unknowingly passing the virus on.’

The NAO also mentioned it had previously highlighted 34% of 211 adult social care sector providers in England who responded to a Skills for Care charity survey in March last year said they urgently needed more staff.

‘These were made even more difficult by the workforce shortages that were already at record levels with tens of thousands of nursing vacancies across the UK’s health and care services.’ The RCN has said there is a shortfall of 40,000 nurses in England.

The NAO today suggested that the Department of Health and Social Care had ‘increased its focus on social care’ as a result of Covid-19, including gathering more data from providers regularly and re-establishing a director-general post with sole responsibility for social care. In December last year, Deborah Sturdy was appointed the first chief nurse for adult social care.

Although, the Government has come in for much criticism recently for failing to ‘fix’ social care – as promised by Prime Minister Boris Johnson when he was first elected in 2019. The Budget in March and Queen’s Speech last week were both seen as ‘missed opportunities’ for allocating money and bringing forward legislation to move quickly on social care reform, which the pandemic has shown is urgently needed.

The NAO report today suggested there was a need for ‘integrating health and social care and placing social care on an equal footing with the NHS’. Ms Cullen added: ‘Government must listen to the warnings of the report that adult social care and the NHS cannot be treated separately.’

The watchdog also said today that ‘communications from Government were not always clear and timely’, including on guidance on PPE. It changed 30 times up to 31 July last year, the watchdog pointed out.

‘While frequent updates were needed to reflect an increased understanding of a new virus and a rapidly changing policy position, social care representatives raised concerns about the guidance, including that the frequency of changes made it confusing,’ the NAO said.

The report also noted that the Government took action to increase the workforce available and redeploy staff in key areas. By the end of April 2020, an extra 18,200 staff were deployed in clinical and support roles, including 10,100 students and 8,050 returning retired and former healthcare professionals, it noted.

But the report said: ‘It is not yet known to what extent this will cause more patients to present, potentially with more acute problems, in future.’

There was criticism earlier on in the pandemic that the redeployment of healthcare workers left vulnerable families unprotected, and could have led to increased violence against children and women, and potentially deaths.

Head of the NAO Gareth Davies concluded: ‘The relationship between adult social care and the NHS, workforce shortages, the challenges posed by legacy data and IT systems, and the financial pressure felt by parts of the system all require long-term solutions.’