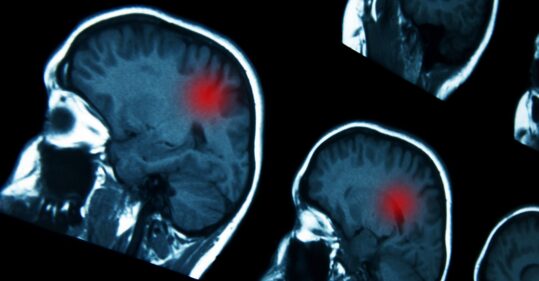 The experimental cancer drug ipatasertib could be combined with another treatment to slow cancer growth or even shrink tumours in patients with aggressive brain cancers, clinical trials have suggested.

Usually, brain cancer can evade detection by the body’s immune defences – but researchers say the new precision drug may be able to ‘uncloak’ tumours to the immune system and make some brain cancers ‘vulnerable to atezolizumab’.

Dr Juanita Lopez, study lead and consultant medical oncologist at the Royal Marsden NHS Foundation Trust, said the ‘findings open the door to the further development of what could become a game-changing treatment option for some patients with aggressive glioblastoma brain cancer’.

He added: ‘Patients with glioblastoma have very poor survival rates, and even fewer new treatment options coming through, so any advance in outcomes would be extremely welcome.’

Researchers recruited 10 patients with glioblastoma who had relapsed after treatment to the Phase I trial, called Ice-CAP.

Two patients who received the combination saw their cancer shrink or stop growing – with one patient’s tumour disappearing completely and showing no signs of the disease 22 months later.

Both patients had brain cancer with defects in a gene called PTEN. If a cancer lacks a working PTEN gene, it instead uses growth signals that are blocked by iptasertib, which the scientists said is why patients with PTEN defects might benefit most from the combination.

They added that it is unusual to see positive clinical responses in Phase I clinical trials, which are run in patients who have advanced cancer as a way of testing a drug’s safety and appropriate dosage. However, these are early results and further research is needed before drawing any conclusions.

Professor Johann de Bono, also involved in the Ice-CAP study and consultant medical oncologist at the Royal Marsden NHS Foundation Trust, said he hopes that ‘with further clinical development, [the combination] can become an important new treatment for some patients’.

He continued: ‘These new preliminary trial results, although in just 10 patients, are exciting for showing the potential of immunotherapy to benefit patients with aggressive brain cancer when combined with a drug that effectively uncloaks the disease to the immune system.’