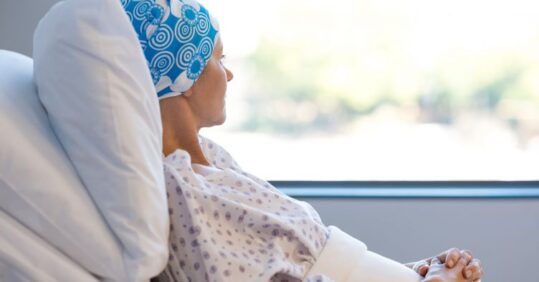 A new cancer drug that could be used to treat a range of cancers, including blood cancers and solid tumours, has been discovered by scientists.

The drug, called fadraciclib, is now being tested in early clinical trials after it was jointly discovered by scientists at The Institute of Cancer Research (ICR), London, and pharmaceuticals company Cyclacel.

Study co-author and The ICR chief executive Professor Paul Workman said the hope is that the drug ‘will result in new targeted treatments for patients with leukaemias and solid cancers’.

The study, published in the journal PLOS One, described Fadraciclib as a dual inhibitor of two cancer-driving proteins from the cyclin-dependent kinase (CDK) family, CDK2 and CDK9.

The drug was designed by improving the chemical properties of a previous CDK inhibitor drug from the research teams, called seliciclib, it said.

It inhibits CDK2 and CDK9 in cancer cells, leading to apoptosis – or programmed cell death – and leads to a drop in the levels of MCL1, a protein involved in cancer cell survival and drug resistance.

Fadraciclib was also found to inhibit the growth of acute myeloid leukaemia tumours in immune-deprived mice by up to 100% and undertook ‘beneficial activity’ against breast cancer cells.

Professor Workman continued: ‘It’s exciting to reach the stage where we can reveal for the first time the chemical structure and synthesis of fadraciclib and also describe its therapeutic properties, especially in cell and mouse models of human leukaemia.’

Earlier this month, research suggested that the Covid-19 pandemic could lead to 35,000 extra cancer deaths in the UK because of diagnosis and treatment delays.

It has also been announced that Nightingale Hospitals are to be converted into cancer testing centres to tackle the backlog of potential cases.

NHS England data last month revealed that the number of urgent cancer referrals made by GPs in April declined by 60% year on year.