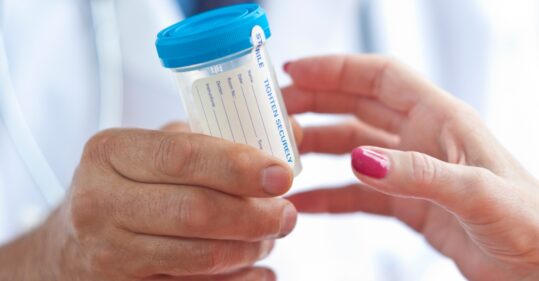 Molecules in urine could help healthcare professionals monitor skin cancer, instead of using invasive biopsies, a study has suggested.

Scientists from the Pavol Jozef Šafárik University found that flourescent molecules that can be detected in urine are produced during the growth of malignant melanoma, an aggressive form of skin cancer.

The research, published in Open Chemistry, collected urine samples of 46 malignant melanoma patients and 10 healthy people, and tested them for biomarkers of cancer using flourescence spectophotometry, an inexpensive and quick process.

The study stated: ‘Spectral measurements of urine samples appear to be a rapid, inexpensive and non-invasive method suitable for monitoring of maligant melanoma progression.’

Urine samples from malignant melanoma patients had different levels of these flourescent markers, compared to samples from healthy patients. The molecules also corresponded to the stage of cancer.

Malignant melanoma is aggressive, so frequently spreads to other areas of the body. Monitoring its progression is important as a result.

However, patients currently must undergo invasive surgery to remove tissue samples, which are analysed by lab technicians in an expensive and time-consuming process.

Malignant melanoma is the fifth most commonly diagnosed cancer in the UK, with around 42 people being diagnosed every day.

Earlier this month, a study found that exposure to outdoor blue light – such as from street lights and commercial billboards – could increase the risk of developing bowel cancer.

Another study found that not brushing your teeth regularly increases your chance of developing mouth and stomach cancer.