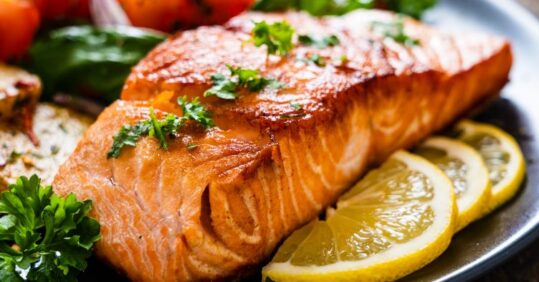 Eating two servings of oily fish such as salmon a week could reduce risk of cardiovascular disease and death, a Canadian study has found.

The research from McMaster University found the omega-3 fatty acids in the fish lowered the risk of heart attacks and strokes by a sixth in high-risk cardiovascular individuals, such as those who have already suffered from heart disease or stroke.

The scientists looked at four large studies with 192,000 participants from 58 countries, around 52,000 of which had cardiovascular disease, over the last 25 years.

He added: ‘This study has important implications for guidelines on fish intake globally. It indicates that increasing fish consumption and particularly oily fish in vascular patients may produce a modest cardiovascular benefit.’

Sudden deaths and overall mortality rates fell 21% and 18% respectively among people with cardiovascular disease who ate at least 175g of oily fish weekly – approximately two servings. They were also 16% less likely to suffer a heart attack or stroke over a decade.

No benefit was observed with consumption of fish in those without heart disease or stroke, but Mr Mente said low risk individuals might still enjoy ‘modest protection’ by eating fish rich in omega-3.

The study was the first on fish intake and health outcomes to take place on all six continents, with previous research focusing mainly on North America, Europe, China and Japan. It is based in data from several studies conducted by the PHRI.

Study co-lead Dr Salim Yusuf, professor of medicine at the Michael G DeGroote School of Medicine, said: ‘This is by far the most diverse study of fish intake and health outcomes in the world and the only one with sufficient numbers with representation from high-, middle- and low-income countries from all inhabited continents of the world.’

Omega-3 fats are a group of unsaturated fats that improve heart health, which are found in oily fish and in smaller amounts in white fish and shellfish, according to Heart UK.

Last month, research found that young adults who smoke, drink and take drugs are more likely to develop heart disease before the age of 40.