Mythbuster: ‘only overweight individuals can get type 2 diabetes’ 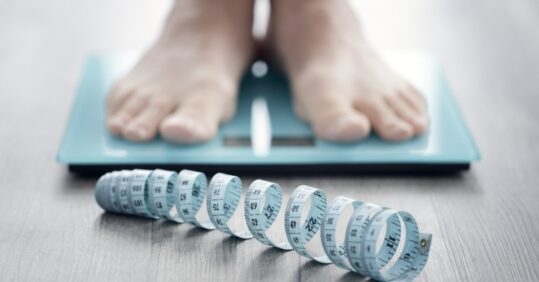 Diabetes is a serious and rapidly growing health condition currently affecting 4.8 million people in the UK Around one million of whom are still undiagnosed. The number of people with diabetes in the UK has trebled in the last 25 years, mainly due to a rise in type 2 diabetes, which accounts for around 90% of all people with diabetes.1

While being overweight is the greatest risk factor for type 2 diabetes, it is important to dispel the myth that only people who are overweight or living with obesity can develop type 2 diabetes. Not least because the perception of excess weight can lead to weight stigma and perpetuate the problem.

Perception and attitudes towards weight

All healthcare practitioners should be mindful when reviewing weight as a risk factor for type 2 diabetes, that BMI should not be the only consideration. A higher BMI does not necessarily mean excess abdominal fat. Visceral fat increases risk of type 2 diabetes, so abdominal circumference should be part of the assessment. Many of us have heard the argument that some elite athletes such as rugby players or sumo wrestlers have a BMI in the overweight (25-30) or obese range (> 35) and yet do not have the same risk. Analysis of two trials following 14 thousand people over 18 years that assessed diabetes risk using hypertension and dyslipidaemia as markers of health found participants with increased metabolic markers but healthy weight had a two-fold higher risk of diabetes when compared to ‘healthy’ overweight people. 5

So, what other risk factors are there for type 2 diabetes?

Age and ethnicity can impact on individual risk of developing type 2 diabetes, with risk increasing with age. (6) White people have an increased risk from aged 40, whereas African-Caribbean, Black African, or South Asian people have an increased risk over the age of 25. In addition, type 2 diabetes risk is two to four times greater in people of South Asian descent and African-Caribbean or Black African descent.7

When assessing risk, HCPs should also consider family history, as having an immediate family member with diabetes can increase a person’s risk two to six-fold.8 Furthermore, one population study demonstrated a combination of genetic variations that increased risk of type 2 diabetes at least three-fold.9 Lifestyle factors, such as smoking and excessive alcohol intake, are associated with a higher risk of type 2 diabetes, as well as increasing the risk of other health conditions, such as heart disease and cancer. Additionally, spending long periods of time sitting, or being ‘sedentary’ is a factor. It’s important for people to remember, even if individuals meet the recommended guidelines for amount of exercise, if they also spend long periods sitting, they may still have a sedentary lifestyle.

Additionally, people in lower socioeconomic groups had an almost two-fold higher incidence of type 2 diabetes, according to one study, as well as a higher prevalence of smoking, unhealthy eating behaviours, and lower levels of physical activity.13

There are a variety of medical conditions that can also affect an individual’s type 2 diabetes risk. A history of gestational diabetes is a strong predictor for subsequent type 2 diabetes.10 Moreover, women who have polycystic ovary syndrome (PCOS) may be up to three times more likely to develop type 2 diabetes.11 PCOS is associated with insulin resistance and therefore higher levels of insulin circulating in the blood.8

Certain mental health conditions are also a risk factor for type 2 diabetes, including schizophrenia, bipolar disorder, and depression. Atypical antipsychotics can increase risk of type 2 diabetes, likely in part due to weight gain being a side effect of these medications.12

In conclusion, weight isn’t the only factor affecting someone’s risk of type 2 diabetes, but it is the biggest one and therefore a public health priority. Healthcare professionals should encourage people to take up the offer of NHS health checks and signpost tools such as Diabetes UK’s free, online Know Your Risk tool. As part of regular health promotion, everyone should be encouraged to take steps to reduce their risk of type 2 diabetes by keeping active and making healthy food choices. With HCPs, being mindful of the potential impact of unconscious bias against people with a greater body mass index.