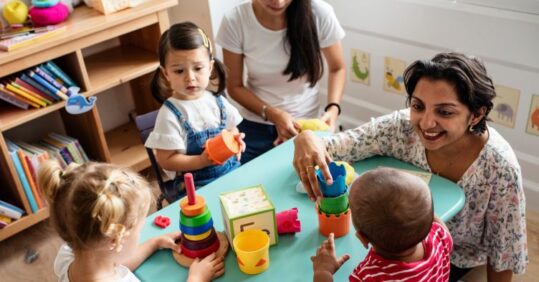 Sure Start children’s centres prevented over 13,150 hospitalisations a year among 11- to 15-year-olds in England before their funding was cut, research has found.

The Institute of Fisal Studies (IFS) report, released today and funded by the Nuffield Foundation, found the savings from reduced hospitalisations alone up to age 15 offset around 31% of spending on the programme. Figures are from the 2000s, when the scheme was being expanded.

Sure Start centres– which offer health, parenting support, childcare and parental employment services in a one-stop shop for families with under-fives – received £1.8bn a year at their peak in 2010. Since then, spending has fallen by more than 60% and many centres have closed.

Maud Pecher, a co-author of the report, said: ‘Sure Start centres dramatically improved children’s health even through their teenage years. Children who had greater access to Sure Start in their early years were far less likely to be hospitalised later on.’

The centres did increase hospitalisations among very young children, because ‘families get more support to use health services’ and children ‘are exposed to a wider range of infection illnesses’ at very young ages, the report showed. An additional centre per thousand children under 5 generated 6,700 extra admissions of 1-year-olds.

At younger ages, ‘large impacts’ on infectious illness suggest that Sure Start ‘significantly strengthened’ children’s immune systems, while a ‘drop in poisonings’ suggested ‘advice on child-proofing the home also had an effect,’ it said.

However, the benefits of the centres were not ‘evenly distributed’, with ‘significantly larger impacts’ on boys and also for children in disadvantaged areas, at least from age 9 onwards, it concluded.

Sarah Cattan, IFS associate director and a co-author of the report, said: ‘The savings from reduced hospitalisations up to age 15 offset around a third of the cost of the Sure Start programme – and that’s before considering any potential benefits in education, social care or crime.

‘Ahead of this autumn’s tight Spending Review, these results are a reminder that policymakers should consider a programme’s potential for long-term savings, not just its up-front costs.’