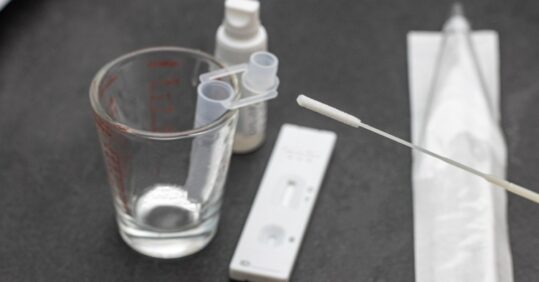 Research has found ways to improve the accuracy of lateral flow tests and reduce the number of false-negative results recorded.

The study, recently published in the journal of ACS Materials and Interfaces, identified that the tests themselves were highly accurate, but the problem arises from the technology which is used to communicate the result of the test – the read-out of the device.

LFDs were introduced around the world in late 2020 to control the spread of Covid-19 by identifying infections in asymptomatic and presymptomatic individuals within half an hour or less of being tested.

However, their use has been hampered by inadequate sensitivity and inaccurate readings with infected individuals wrongly assumed to be noninfectious, creating a significant spread risk of the virus in the community.

Working at the Diamond Light Source, a national science facility that houses the UK’s only synchrotron – a powerful particle accelerator, which works by speeding up charged particles to the speed of light – the researchers were able to examine how the virus interacted with the LDFs at a high level of detail.

X-ray fluorescence imaging from the particle accelerator revealed that the tests had a deficiency in the readout as opposed to problems with detection levels of the virus. The work has highlighted potential modifications that could enable increased accuracy of LFDs.

Professor Owen Addison from King’s College London said: ‘Methods to detect infectious individuals who do not show or are yet to show symptoms remain essential for the management of the current pandemic.’

He added: ‘Lateral Flow Devices are the simplest and most accessible tests available, and our findings show great scope for improving the deficiencies that these tests have been recently criticised for.’