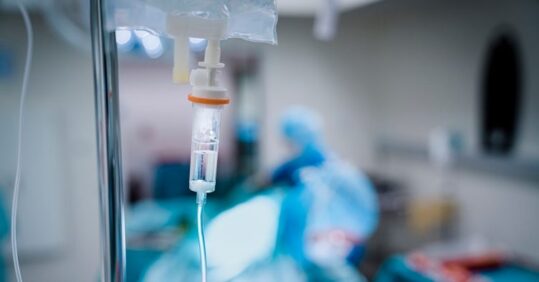 The NHS is preparing for a ‘triple whammy’ of rising Covid-19 infections, a major treatment backlog and reduced capacity because of infection control measures this winter, senior health leaders warned today.

An NHS Confederation report, which interviewed 250 senior leaders in the English NHS, stressed the need for extra investment and support for frontline services if they are to ‘emerge from the pandemic on stronger footing’.

It also urged the Government to be ‘honest and realistic’ about the pandemic’s impact on NHS capacity. Three-quarters of NHS leaders surveyed said they were not confident of meeting targets to restore routine operations to last year’s levels by the end of October.

In addition, fewer than one in 10 NHS bosses said the current level of funding allowed them to deliver safe and effective care, and nearly nine in 10 said a lack of funding would be a significant barrier to achieving waiting time targets.

While the NHS in England benefited from a £20bn, five-year funding settlement in 2018, the impact of Covid-19 means this must be reassessed in the Government’s spending review in November, the report recommended.

It also called on changes introduced in recent months to be made permanent – including handing more control to local leaders and ‘stripping away unnecessary bureaucracy’ that ‘for too long has stifled the service’.

Covid-19 has shown that the integration of health and social care is crucial to putting the NHS on a more sustainable footing, it added.

It also noted that Covid-19 has disproportionately impacted people living in poorer communities, and from black, Asian and minority ethnic (BAME) backgrounds.

NHS Confederation chief executive Danny Mortimer said the Government must not to ‘continue with short-term fixes, bail-outs and ever-increasing targets and regulation’ to tackle the Covid-19 ‘triple whammy’.

He said: ‘The strain will continue to be felt across the country, but we must take this opportunity to re-cast services for the long-term benefit of patients and local communities.’

‘This is a moment of truth for the Government and its stewardship of the NHS,’ he added.

RCN chief executive Dame Donna Kinnair said that ‘nursing is a particular area of concern’ with ‘a serious shortage’ of staff already, on top of many considering leaving the profession.

She continued: ‘We are calling on the government to invest in the health service and deliver a fair pay rise for nursing staff.

‘There also needs to be measures to properly care for nursing and other healthcare staff… Government must take action to address these issues, especially as we head into what is certain to be an extremely difficult winter.’

The recommendations come after a Public Accounts Committee report last week cast doubts on the Government’s ability to deliver 50,000 more nurses by 2025 amid an ‘emerging crisis’ in the profession.

Official figures show the number of weekly deaths involving coronavirus in England and Wales rose to 139 in the week ending 18 September.