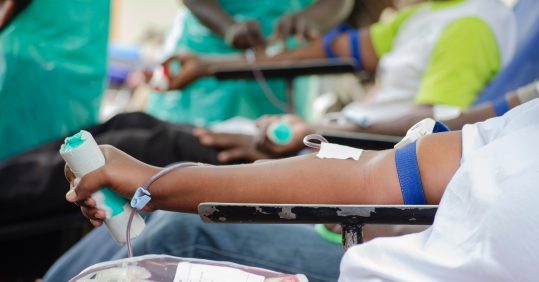 Blood donation is to be made more inclusive, with the removal of a question that has been branded ‘outdated, unnecessary and actively discriminatory’, the Government today announced.

Donors in England will no longer be asked if they recently had sex in areas where HIV is widespread, including Sub-Saharan Africa. Those who answer yes currently cannot donate for three months, which means some Black African donors and others in long-term relationships have been unable to give blood.

The Department of Health and Social Care (DHSC) said it hopes the change, which will come into force by the end of this year, will make it easier for black African donors in particular to give blood.

The decision will not compromise the safety of blood supply in the UK, it added. Donors will still be asked other questions to pick up individual, high-risk behaviours such as recent travel to countries where HIV is endemic.

She added: ‘The science is clear that this is unnecessary and does nothing to improve safety. Instead, it actively prevents much needed donors coming forward to give blood, particularly from black communities.’

People who are black African, black Caribbean and of black mixed ethnicity are more likely to have the rare blood sub-group, such as Ro, that many black sickle cell patients need.

Health and social care secretary Sajid Javid said: ‘This is another progressive step forward, focusing on individual behaviours, rather than blanket deferrals, and reducing limitations for people to donate blood. This will make it easier for Black donors in particular to donate blood.’

Chamut Kifetew, health Equalities Lead at Terrence Higgins Trust, said: ‘We’re glad this decision has been made that will enable more people, particularly those of African heritage, to safely donate much needed blood products in England.’

The DHSC said the decision was taken following research by the For the Assessment of Individualised Risk (FAIR) steering group and supported by the Advisory Committee on the Safety of Blood, Tissues and Organs (SaBTO). The change will be reviewed 12 months following its implementation.

In June, a blanket deferral for men who have had sex with men in the last three months was lifted.