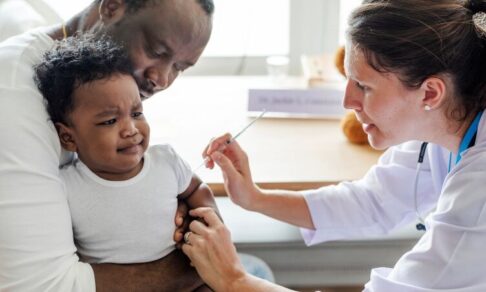 Helen Bedford, Professor of children’s health at UCL Great Ormond Street, has said that as levels of routine vaccinations fall well below the WHO target, the risk of outbreak has become much more severe.

NHS Digital data released last week showed that all routine childhood vaccinations were below the WHO coverage target of 95%, and that all but one of the 14 indicators were lower than the previous year.

Coverage for the MMR vaccination, which protects against measles, mumps and rubella, had fallen particularly low, with only 85% of children receiving their second dose by the age of five.

The WHO declared that the UK had eliminated measles in 2017, following large outbreaks in 2012-13 in which there were 2,032 lab confirmed cases in a single year.

While cases subsided in subsequent years, an outbreak of 989 cases in 2018 promped the WHO to revoke the UK’s elimination status. This means that the WHO considers the transmission of measles to have been re-established in the community. However, this year there have only been two confirmed cases in the UK.

Professor Bedford told Nursing in Practice that measles was like ‘the canary in the coal mine’, meaning that an outbreak would be the first sign that something had gone seriously wrong.

‘Especially with measles, because it is the most infectious, it doesn’t take a big decline in uptake for you to start seeing outbreaks of the disease,’ said Professor Bedford.

These concerns were also echoed by Helen Donovan, RCN professional lead for public health and specialist in immunization, who told Nursing in Practice that ‘with the rates of uptake of the vaccine that we have in areas like London’, an outbreak was ‘almost inevitable.’

An NHS spokesperson said: “This data covers the pandemic, when people were much less likely to come forward for childhood vaccinations.’

However, Ms Donovan argues that this decline in vaccine coverage is not a sudden dip that could be associated with the Covid-19 pandemic, but part of a ‘gradual decline’ taking place over many years.

‘It’s an ongoing trend,’ said Ms Donovan. ‘The rates of decline are quite small and gradual, but they have been going on for some time.’

When asked why this decline has been happening over the last ten years, both Ms Donovan and Professor Bedford point to a greater ‘fragmentation’ of immunisation services following the reorganisation of NHS services in 2013. This included the introduction of CCGs, and the transfer of responsibility for the NHS moving from the Department of Health and Social Care to NHS England.

Prior to that time, says Professor Bedford ‘immunization was highly organized in areas and you had immunization coordinators’, with primary care trusts the sole organisation responsible for the commissioning, coordination and evaluation of immunisation.

However, all of that was ‘stripped away’ in the 2013 reorganisation, leaving a lack of clarity over responsibility for immunisation.

However, Professor Bedford also highlighted the important role that health visitors play in providing accurate information about vaccines when it is need most and early years vaccination.

Health visitors ‘are often the first contact for families with new babies and they are the ones who provide health promotion’, she explained.

‘If you see the same health visitor over a period of time you develop a relationship with them, and if they’re saying that immunisation is a good thing you might be more willing to take that on board.

Both Professor Bedford and Ms Donovan both stressed the importance of nurses following the NICE guidelines and following up with patients to ensure that vaccine appointments are not missed.

‘We need to be telling people when their vaccines are due, we need then to keep reminding them’, said Ms Donovan. ‘I think we do need to applaud the way that the service on the whole manage this.

‘But I think what we do need to say is that it does need a consistent and concerted effort.

A spokesperson for the NHS said: ‘Childhood vaccinations last for life so it is never too late to come forward for one, which is why this year the NHS launched a wider childhood vaccination recovery programme including a mass MMR catch-up campaign to help vaccinate children who missed a vaccine – any parent or carer whose child missed out on a vaccination should come forward and book their child in without delay.’