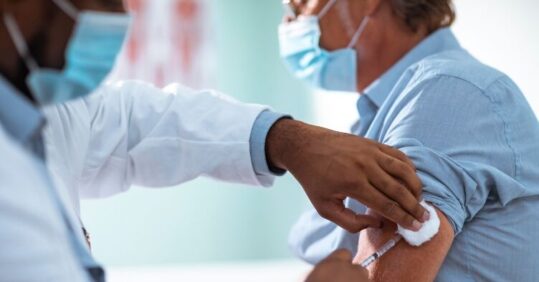 The UK Health Security Agency (UKHSA) will deliver its last remaining stocks of monkeypox vaccine to the NHS next week, with a further batch of 100,000 doses not expected until ‘later in September’.

An update from UKHSA said that ‘by the end of next week UKHSA will have allocated all of the remaining stock (around 5,000 doses as of 11 August)’ of the smallpox vaccine ‘that is currently in the country’ to the NHS.

It added that at the ‘current rapid rate of delivery in NHS services, the ‘majority of these doses will have been delivered to those identified to be at higher risk by the end of the month’. Leaked documents had first suggested an impending shortage last week.

The UK purchased an additional 150,000 doses of the smallpox vaccine at the start of the current monkeypox outbreak, but only 50,000 doses could be delivered immediately, with the remaining 100,000 needing to made to order.

However, UKHSA also said that around 27,000 doses of vaccine have already been administered by the NHS to those at the highest risk of exposure to monkeypox, which ‘should have a significant impact on the transmission of the virus’.

Anyone can get monkeypox but the UK outbreak has predominantly affected gay, bisexual and other men who have sex with men, meaning this group has been prioritised for vaccination alongside some healthcare professionals.

The UKHSA update said: ‘Until the delivery of further doses in September, the NHS and local partners will continue to vaccinate in line with any residual supplies, and to ensure that those who are not already in touch with services know where and how to access vaccination.

‘Sexual health services will keep a record of those eligible so that they can be invited forward for vaccination as soon as new supply becomes available.’

Only one vaccine is approved for the prevention of monkeypox among groups most at risk – a third-generation smallpox vaccine known as MVA-BN or Imvanex produced by Danish company Bavarian Nordic.

Sexual health services have been leading the roll out of smallpox vaccination to those at risk of monkeypox since July.

As of last week, there had been 2914 confirmed and another 103 highly probable cases of monkeypox in the UK, 2883 of which are in England.

UKHSA said while data suggests the outbreak seems to have slowed more cases are being seen every day.

This comes after a study last month suggested that patients infected with monkeypox virus in the current UK outbreak are presenting with different symptoms than in previous outbreaks, prompting researchers to call for a change in case definitions.