NMC may have prematurely decided on post-registration standards, says QNI 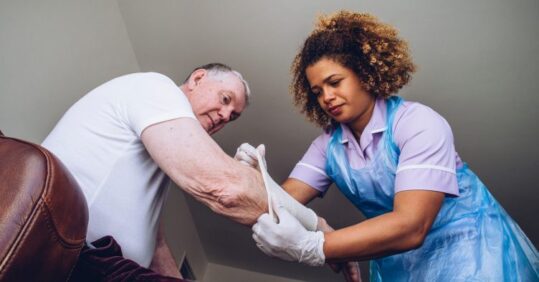 The NMC may have made decisions on post-registrations standards proposals prior to the pre-consultation engagement process, meaning it did not properly take into account expert feedback.

QNI chief executive Dr Crystal Oldman raised these concerns to Nursing in Practice after the NMC announced this week that it would push ahead to public consultation on the controversial community nursing plans, despite requests from the QNI, the RCN and other nursing groups to delay the process.

Dr Oldman told Nursing in Practice that it ‘may be that the decision about how [post-registration standards] should look was made by the NMC more than a year ago. Feedback from experts that doesn’t fit in with the predetermined outcomes appears to have been dismissed.’

But draft proposals from the nursing regulator would introduce one set of SPQ standards for all fields with ‘bespoke elements where needed’, although it was revealed in its January council meeting that ‘very few field specific standards have been identified by stakeholders that are bespoke’.

The QNI last week joined nine other organisations and groups, including the RCN, in raising concerns that the NMC has not yet been able to identify any bespoke – or specialist – standards.

Dr Oldman said: ‘Given the NMC has decided to go ahead with this public consultation, we have a duty to help nurses understand that this will lead to variation in the way community nursing programmes are offered and delivered, and possibly the phasing out of these programmes.’

She argued that specialist standards are needed alongside core standards to ‘distinguish the knowledge and skills needed by different nurses’ who are working in ‘high-risk, high-harm environments and carrying out complex work on their own’.

This was agreed ‘more than a year ago’ by the NMC post-registration standards steering group (PRSSG), which she is a member of, but a meeting of the PRSSG ‘hasn’t happened’ yet, she added.

The group of 10 organisations also requested a delay to the public consultation ‘given the immense pressures being faced by nursing staff in the community due to the impact of the pandemic’.

Dr Oldman said: ‘The workforce is exhausted. This is not the time to go out to consultation. It should be delayed until the majority of the adult population have been vaccinated and people are no longer working extra hours and days. Please taken into account what is going on with nurses.’

In a letter responding to concerns from the 10 organisations, NMC executive director of professional practice Professor Geraldine Walters said ‘all sources of evidence’ were used to develop the draft standards and that ‘significant steps’ were taken to update the PRSSG and other stakeholders.

If the NMC did not press ahead with its public consultation, it ‘would not have the capacity to revisit this work until 2022’, she added.

She continued: ‘We will use the independent evidence from the consultation and continue to work with PRSSG and other stakeholders to make decisions and finalise these standards.’

The NMC four-month public consultation on its review of post-registration standards will begin on 8 April after delays because of the Covid-19 pandemic.

This comes as part of a review by the NMC of its post-registration standards, which is also looking at Specialist Community Public Health Nursing (SCPHN) standards.