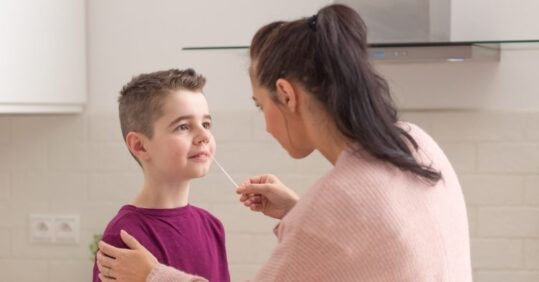 Self-testing for Covid 19 in the kitchen as mum takes a sample from her son nose using swab.
Helen Quinn

Nose swabs taken by parents to detect common respiratory illnesses in children are as good as those taken by nurses, according to a study at the University of Bristol.

Respiratory illnesses such as coughs, colds and flu, and more recently, Covid-19, can be confirmed by collecting cells from the lining of the nose. Parents taking nasal swabs from their children were found to collect a higher number of cells in comparison to the nurses. However, saliva swabs taken by parents were not as effective at detecting respiratory microbes as those taken by nurses.

The study involved over 300 parents and 485 children of approximately five years of age showing symptoms of RTIs. All participants were from the Bristol area, and the research took place before the Covid-19 pandemic. Swab samples were taken by a parent and a nurse on the same day at home and sent to a clinical laboratory to test for over 40 common respiratory pathogens.

Alastair Hay, a GP and Professor of Primary Care Research at the University of Bristol, who was involved in the study, said: ‘Given the widespread use of nasal swabbing throughout the Covid-19 pandemic, this study has highlighted the suitability, benefits and convenience of parent-collected swabs for subsequent identification of respiratory microbes.’

Parents should be confident about collecting nose swabs from their child for any common respiratory infection, including Covid-19, according to lead author Dr Claire Woodall and an epidemiologist from the University of Bristol.

Dr Woodall said: ‘In fact, our study showed that parents collected a higher number of human cells on the nose swabs compared to the nurses, which suggests that children are more tolerant of a parent performing the swabbing technique.’

The researchers suggest a low cost, easy to collect kits for home testing of RTIs should be considered, stating that nasal sampling by parents for RTIs in children would ‘greatly reduce the burden on community nurses without reducing the effectiveness of diagnoses’.