Four days in and nursing strikes yield no concession on pay 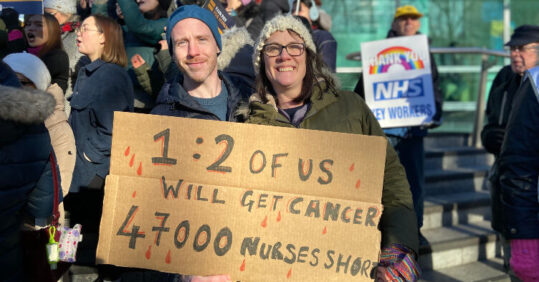 The fourth day of the Royal College of Nursing’s (RCN) strikes are being held today (19 January), as thousands of nurses walk out of NHS trusts across England.

The continued protests is the second of two days of planned industrial action from the nursing union this month, taking place across 55 different NHS employers.

This comes as part of an ongoing dispute between healthcare unions and the Department of Health and Social Care (DHSC) which began last July after nurses were awarded a 4% pay rise, well below current rates on inflation.

Yesterday morning outside University College London Hospital (UCLH), over a hundred nurses on Agenda for Change contracts gathered to protest against the Government’s pay deal.

Despite the cold conditions, a large crowd gathered in support as buses and passing drivers honked their horns in support.

Joining their colleagues on the picket line were nurses from every department of the hospital. Nursing in Practice spoke to nurses from the infection control, urology, critical care, cancer, and tertiary care teams.

Speaking at the end of the Royal College of Nursing’s third day of strike action, RCN general secretary and chief executive Pat Cullen, said: ‘Rather than grabbing our olive branch, Steve Barclay is desperately looking for new ways not to negotiate with nurses.

‘Hundreds of impassioned nurses told me in person today that this strike is about discovering their voice after many years of being let down. The patients who joined picket lines see this as a battle for the soul of the NHS as much as it’s about pay rises.

‘With just as many nursing staff ready to head into the cold again tomorrow morning, the Prime Minister must ask himself why and understand that only he can set the NHS on a better path.’