Majority of the public blame Government for RCN nurses’ strikes 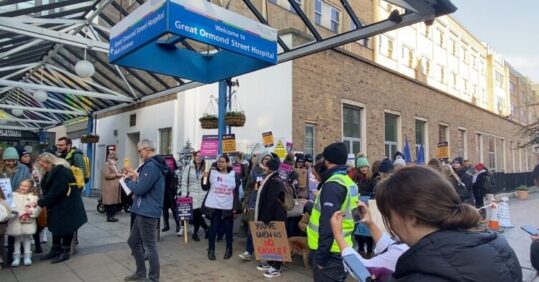 The majority of the general public blame the Government for the nurses’ strikes, while only one in ten blame nurses themselves, a poll has found..

A poll of 2,065 UK adults, conducted by Savanta shortly following the first day of industrial action on 15 December, found that overall support for the nurses’ strike has risen by seven points since the dates were first announced in late November.

The ‘net support figure’, calculated by taking the difference between the total who support the strikes and those who oppose, rose from +35 to +42 by the close of the first day of industrial action.

The poll also found that 54% of those surveyed said they blame the Government for the RCN nurses’ strike taking place across the country. Meanwhile, 27% said that they blamed the trade unions, and only 11% blamed the nurses themselves.

Emma Levin, senior political consultant at Savanta, said: ‘The Government may have hoped that, as the impact of the nurses strike started to take affect, the high levels of public support would begin to fall, but so far there has been very little sign of any wavering in public backing.’

‘While there is a chance that continued disruption over Christmas could change things, most say nurses should be able to strike during the winter period. With no resolution in sight and the majority blaming the government rather than the unions or the nurses, it could be a very unhappy new year for Rishi Sunak’s government.’

The poll also found that while the public are concerned for patients impacted by the strikes over the Christmas period, only a quarter said they sympathise with the affected patients more than the nurses themselves, while 51% said they think the nurses should be able to strike during the winter period.

Health and social care secretary Steve Barclay said: ‘I hugely value the work of our NHS staff and it is disappointing some union members are going ahead with further strike action when we know the impact this has on patients.

‘My number one priority remains keeping patients as safe as possible and I’ve been working closely with the NHS and across government to protect safe staffing levels. The NHS remains open, patients should continue to come forward for emergency and urgent medical care. They should also continue to turn up to appointments unless they have been contacted by the NHS.

‘The RCN’s demands are unaffordable during these challenging times and would take money away from frontline services while they are still recovering from the impact of the pandemic. I’m open to engaging with the unions on how to make the NHS a better place to work.’