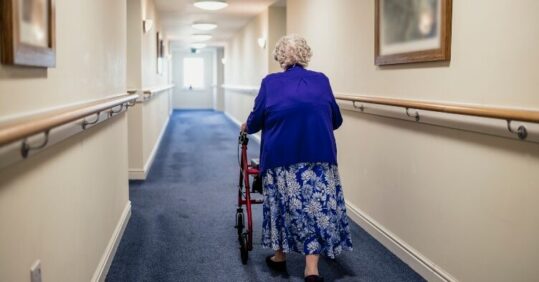 A care home nurse has been struck from the NMC register after it was found that she had abused a care home resident, pulling away her zimmer frame and calling her ‘childish’ and ‘stupid’.

Mrs Susan Hughes, a mental health nurse at Charlotte House Care Home, Bebington in Wirral, was found to have dragged and pushed away a patient’s walking frame, shouted obscenities at her, and failed to alert medics when the resident’s health deteriorated.

In a statement heard by the NMC, one of Ms Hughes’ colleagues described how they say her ‘dragging Resident A’s zimmer frame forcing her to walk forward’. A number of witnesses also reported Ms Hughes using force ‘in a range of ways’  such as by pulling her arms and clothing, and ‘throwing’ the patient or ‘placing her with force’ onto the bed.

Ms Hughes was also frequently verbally abusive to her patient, calling her ‘childish’ and ‘stupid’, the NMC heard from witnesses.

The fitness to practise committee also found it to be proven that the nurse had been neglectful of her duty of care, reporting that during the day Ms Hughes would watch Netflix and sleep, failing to respond to call bell.

It was also found that Ms Hughes failed to alert a manager or doctor when the resident’s health began to deteriorate. She had been warned two days prior that there was a risk of deterioration and that hospitalisation would be the appropriate course of action should this occur.

However, Ms Hughes failed to make even basic observations such as pulse, temperature, and blood pressure when she noticed that the resident’s condition had deteriorated.

The NMC panel said the charges amounted to misconduct and were serious, ‘falling below what would been expected of a reasonable and competent nurse’.

Ms Hughes’ actions ‘showed a complete disregard to several parts of the code… and could be considered bullying in nature’, the report continued.

The NMC said she demonstrated ‘almost no insight into her misconduct’ and was a “risk to patient and public safety if allowed to practise unrestricted’.

Ms Hughes was handed an interim suspension order until she is struck off the register.

This comes after a care home nurse was struck off the NMC register this week after previously being found guilty of wilful neglect of an 87-year-old female resident.