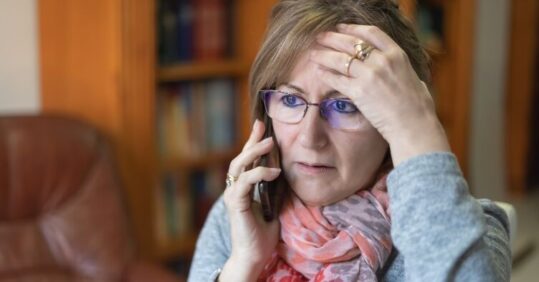 Except for the first two weeks of the Covid pandemic, this was the highest number of 111 calls ever recorded, said NHS England.

However, on the first day of RCN industrial action, the NHS urged patients to ‘continue to come forward for the care they need’, including calling 999 ‘if is a medical or mental health emergency’.

The week before last there were 440,047 calls to NHS 111. NHS England said the 700,000 included more calls from parents concerned about rising Strep A infections, with the number of calls about the condition doubling compared to the same week last year.

At the same time:

Professor Sir Stephen Powis, NHS national medical director, said: ‘This huge increase in calls to NHS 111 is understandable with concerns about winter viruses – including strep A – a top priority for the public, but it is more important than ever that the public uses 111 online where possible to get important information about non-emergency health conditions and to be signposted to the best possible care.

‘With industrial action planned today and next week, NHS teams are working hard to minimise disruption and while people may see their local services impacted, they must continue to call 999 in a life-threatening emergency during strikes, as well as attending pre-booked appointments as planned unless they have been contacted for it be rearranged.’

There have been 15 confirmed deaths of children from Strep A since September.

GP consultations for scarlet fever and disease notifications are rising more steeply than expected for this time of year as are cases of invasive group A streptococcus, although less pronounced, the UK Health Security Agency (UKHSA) has warned.

A total of 6,285 cases of scarlet fever have been reported in England and Wales in the past six weeks with more than 13,000 cases between weeks 27 to 49, the UK Health Security Agency latest figures show.

Yesterday, the Government attempted to ease related antibiotic shortages by adding amoxicillin, penicillin V, azithromycin and cefalexin onto the list of medicines subject to a ban on exporting or hoarding.

A version of this article was originally published on our sister publication Pulse.