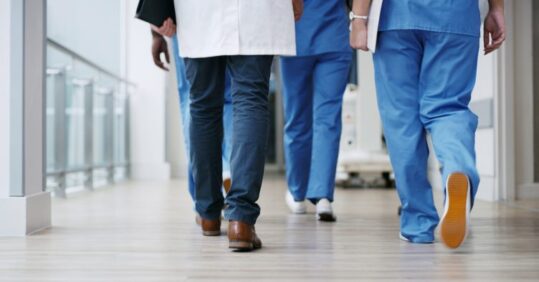 The NHS is likely to face a longer recovery than health services in other countries because of existing problems such as staff shortages, a new report has found.

The Nuffield Trust compared measures taken in response to Covid-19 by the NHS in the UK to health systems in 31 other countries, including Germany, France, Italy, Sweden, Spain and the United States.

The report found that the NHS entered the pandemic with fewer nurses, doctors and hospital beds per person, lower levels of spending on buildings and equipment, and higher levels of hospital bed occupancy.

She continued: ‘This will mean longer waits for treatment, further rationing of care and the danger that health outcomes in the UK, which already lag behind many other similar countries, will worsen.’

The analysis also found the UK ranked in the bottom third when it came to capital spending, doctors per person, hospital beds per person and hospital bed occupancy.

The report also warned that although the UK ranked among average in waiting times, this position is likely to ‘deteriorate’ because of ‘an outdated estate and chronic staff shortages’ coupled with stricter infection control measures.

Ms Reed continued: ‘The NHS and its staff pulled out all the stops to react to the pandemic with impressive speed and resilience, avoiding the harrowing scenes in hospitals seen in other countries.

‘But in the face of our devastating outbreak, the longstanding issues with bed capacity and workforce shortages that have been with us long before Covid-19 will continue to slow the health service down compared to other systems in the race to recovery.’

This comes as more nursing staff than ever are considering leaving the profession, largely because of pay, a Royal College of Nursing report warned last week.

Nursing leaders have also warned that a 15% rise in nursing degree applications was ‘not enough’ to fix staffing shortages, and the Nursing and Midwifery Council said a record annual growth on its register may not be sustainable.