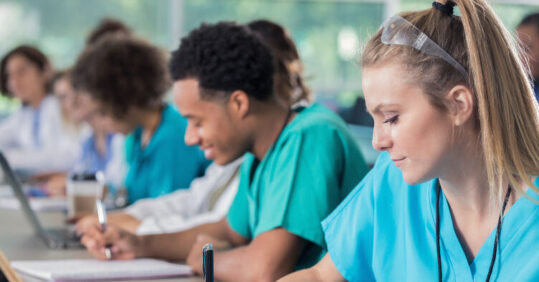 The Nursing and Midwifery Council (NMC) will consider proposals to replace rules imposed by EU regulation as part of steps by the regulator to modernise pre-registration education programme standards.

Tomorrow (25 January). the NMC council will consider plans giving more flexibility in the provision of pre-registration education for nurses and midwives. This follows months of research and consultation with over 8,000 responses.

With standards not needing reflect EU regulations following Brexit, the NMC said it is looking to make education requirements for the UK more flexible. These changes will primarily affect the requirements for practice placements and pre-registration training.

If the proposals are passed, education institutions will have the flexibility to offer up to 600 hours of the required 2,300 practice learning hours via simulation for nursing courses.

The proposal was supported in the consultation, with 70 percent of respondents saying they supported the change, provided that no more than 600 hours were simulated.

Andrea Sutcliffe, NMC chief executive and registrar, commented: ‘It’s essential that nursing and midwifery education is accessible to the broadest possible range of students and prepares them to meet people’s changing and increasingly complex needs.

‘That’s why we’ve drawn on evidence and best practice to propose changes that will widen access to courses and give students the best possible education that enables them to provide excellent care to people.’

The proposals being considered by NMC would also give institutions the capacity to set their own entry requirements, including removing the need for at least 12 years of general education before starting a nursing or midwifery course.

However, this was met with a mixed response in the consultation, with respondents saying they were concerned that this could lead to the admission of students younger than would be consider appropriate or safe.

In response, the NMC has added a provision that students entering a course under-18 should receive appropriate supervision.

Also receiving a mixed response were plans to remove reference to an EU implemented list of approved placement locations from the standards.

The NMC says that removing this requirement this would ‘allow students to do all their practice learning in the settings most relevant to them’.

However, only 55% of respondents supported this in the consultation, and 30% said that they were opposed to the plan. Some raised concerns about the new qualification’s comparability with European regulations, with the changes potentially making in harder for UK trained nurses to work in the EU.

Professor Jean White, chair of the NMC Future Programme Standards Steering Group said: ‘It has been rewarding to see how the opportunities presented to us have enabled the NMC to make improvements to the nursing and midwifery programme standards.’

However, the NMC noted that some external stakeholders including Government bodies have continued to push further with reform to education standards, particularly for a significant reduction in the the number of practice learning hours required.

NMC Council papers said: ‘through our engagement with the FPSNM Steering Group, the Chief Nursing Officers and Council of Deans for Health there is external appetite for us to be more ambitious, including exploring a scenario of a minimum of 1,700 practice learning hours, with the remainder of the 4,600 hours being a flexible mixture of simulation and theory.’