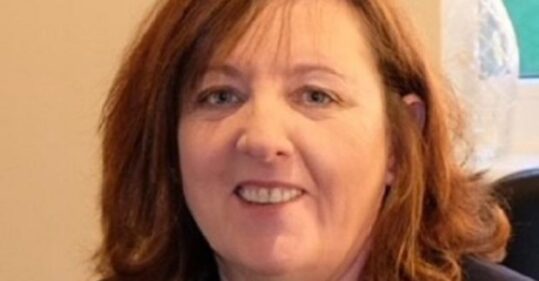 Ms McIlgorm, who trained as a nurse and a midwife and worked in the NHS for nearly 30 years, will take up the chief nursing officer (CNO) role in March 2022.

She has recently worked as a professional advisor within the CNO directorate at the Scottish Government, where she contributed to policy development across health and social care.

Health minister Robin Swann, who announced her appointment, said she ‘brings with her a wealth of experience and knowledge that will complement the dedication and professionalism of the nurses, midwives and Allied Health professional across the health and care sector’.

He added: ‘I look forward to Maria joining the team of professionals at the Department of Health and wish her well for the move.’

Ms McIlgorm has also held many leadership, management and strategic positions across a range of acute and community settings within health and social care in both England and Scotland.

Her previous roles include her appointment as chief nurse for Edinburgh Health and Social Care Partnership in 2015, as well as chief midwife and nurse for women’s services at NHS Lothian from 2003 to 2012.

Ms McIlgorm said: ‘I am delighted and privileged to be appointed to the Chief Nursing Officer post in Northern Ireland. I was born in Belfast and from a young age have had a close affiliation with here, so this feels like coming home.’

Linda Kelly will leave her post as interim CNO for Northern Ireland.

The appointment comes after Professor McArdle stepped down from the role in August last year to take become deputy chief nursing officer for patient safety and improvement with the NHS in England.