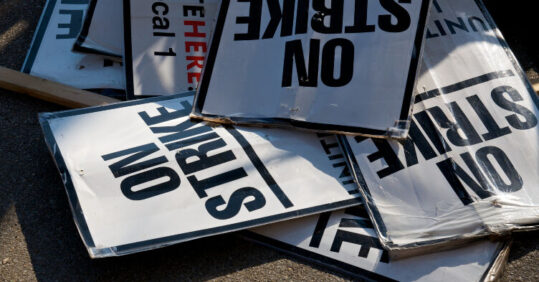 The Royal College of Nursing (RCN) has said (24 January) that it will not accept a proposal for a one-off payment for NHS nurses made by the Welsh Government last month in attempt to avoid further nurses’ strikes.

RCN Wales, which is set to lead nurses out on strike in February, has said it is ‘not prepared to discuss any further’ the proposal unveiled earlier in January by first minister Mark Drakeford.

While exact details of the offer are not publicly known, Welsh health minster Eluned Morgan previously told the Senedd that she had offered the health unions a ‘one-off cash payment’ which would have been funded through this years Welsh Government budget.

The RCN says that it is still open to pay negotiations, but that the offer put forward is ‘simply not enough to offer a substantive and restorative pay award to our members’.

The RCN representative continued: ‘RCN Wales attended a meeting with the Minister for Health and Social Services, at the Minister’s request. While we were told it would explore ways of coming to a negotiated agreement on the 2022/23 NHS pay award, we are still no further forward.

‘Yet again, the Welsh Government has blamed the UK Government’s lack of additional funding for public services rather than taking responsibility to invest in Welsh nurses delivering Welsh NHS services for Welsh people.Welsh Government continue to fail dismally to resolve the RCN’s pay dispute and to address the extensive and unsustainable nursing staffing crisis in the NHS.

On 6 and 7 February, RCN members from 73 NHS employers across England and Wales will undertake industrial action as part of an ongoing dispute over pay. On 6 February, the nurses’ strike will coincide for the first time with an ambulance strike.

A Welsh Government spokesperson said: ‘We recognise and respect the strength of feeling among NHS staff. We will continue to work to bring together trade unions, employers and government to deliver the best possible outcomes for staff, while continuing to call on the UK Government to use the funding it has to provide a fair pay offer to NHS staff and enable us to do the same in Wales.

The RCN is calling for a pay rise of inflation plus 5%, although RCN  general secretary Pat Cullen has said she would be willing to meet the Government halfway. However, the Welsh Government maintains that it cannot afford a pay-out meeting the union’s demands without additional funding from the Westminster Government.

In a statement, RCN Wales director Helen Whyley indicated the union was still prepared to negotiate over pay with the Government.

Ms Whyley said: ‘I have been clear that only genuine negotiations with us can avert further strikes.

‘We are not prepared to discuss any further the one-off non-consolidated payment proposed by the Welsh government in our last meeting unless the parameters of that payment change.

‘Our elected members have judged this as a political quick fix rather than a move towards a solution of the crisis in the nursing workforce recognising the value of nursing in a substantive and restorative pay award.’