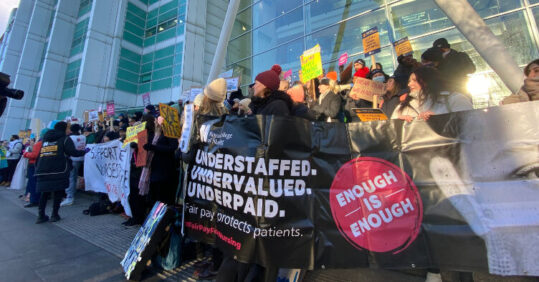 A combined day of nursing and ambulance strikes next month has not been coordinated in advance by the two unions, despite both announcing action for the same day.

Nurses will be joined by ambulance workers across eight services represented by GMB union and Unite on 6 February.

This is the first time in the disputes that both have taken industrial action on the same day, leaving NHS leaders fearing that a ‘prolonged war of attrition’ between unions and the Government could impact patient care, according to the NHS Confederation.

Thousands of nurses on Agenda for Change contracts across England and Wales will walk out of 73 trusts across the country on 6 and 7 February.

RCN general secretary and chief executive, Pat Cullen, said: ‘It is with a heavy heart that nursing staff are striking this week and again in three weeks.

‘We are doing this in a desperate bid to get ministers to rescue the NHS. The only credible solution is to address the tens of thousands of unfilled jobs – patient care is suffering like never before.

‘My olive branch to governments – asking them to meet me halfway and begin negotiations – is still there. They should grab it.’

Despite some media reports that February’s nursing and ambulance strikes were ‘coordinated’, both the RCN and GMB unions maintain that there was no coordination between the two on strike dates.

GMB confirmed to Nursing in Practice that the RCN strike dates were announced after the committee had already decided strike dates on the morning of 16 January. An RCN representative separately confirmed that the union did not coordinate on setting strike dates.

Rachel Harrison, GMB national secretary, said: ‘GMB’s ambulance workers are angry. In their own words ‘they are done’. Our message to the Government is clear – talk pay now.

‘Ministers have made things worse by demonising the ambulance workers who provided life and limb cover on strike days – playing political games with their scaremongering.’

This comes after yet another breakdown in negotiations between the nursing unions and national Governments after talks faltered last week. While RCN Scotland has postponed announcing further strike dates while members are consulted on a substantial package of concessions, the Westminster and Welsh Government’s have failed to reach an agreement.

The Welsh Government meet with unions to discuss NHS pay but failed to reach any agreement or a ‘substantive’ pay offer to improve nurses’ pay. Health secretary Steve Barclay, has not entered into formal pay negotiations with the unions.

On Wednesday and Thursday this week (17 and 18 January) the NHS was hit by two days of industrial action by nurses. Across the NHS in England, 55 trusts took part in the strike. The strikes planned for February will be significantly larger.