Nurses forced to use food banks as cost of living bites 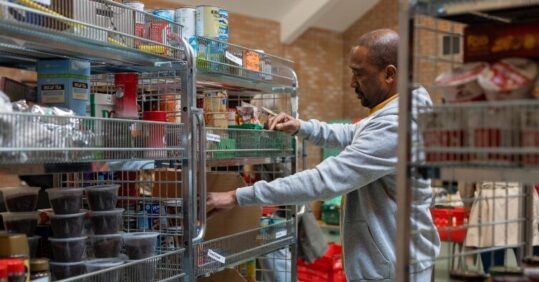 Nurses and other healthcare staff are being forced to use food banks as the rising cost of living piles pressure on households across the UK, it has emerged.

A food bank manager has told Nursing in Practice that nurses in their area are using the service for the first time, which comes after the Trussell Trust, Britain’s largest food bank network, yesterday revealed that the UK was facing a ‘tsunami of need’ with almost 1.3m emergency parcels provided by their service in last six months.

Charlotte White, the manager of Earlsfield food bank, which is opposite St George’s Hospital in London, told Nursing in Practices that her food bank is now being used by nurses for the first time.

Ms White said: ‘We’ve definitely had some nurses come in, and not just nurses but other people who work at the hospital. It’s a teaching hospital, so a couple of times we’ve had students as well.’

This is part of a broader trend of more people in work needing to access the food bank, she added, explaining: ‘A year ago, we never used to see any nurses. This has definitely been something we’ve only seen in the last 12 months.’

In its mid-year report, the Trussell Trust also found that one in five people referred to food banks are now working, as well as a 30% increase in demand for its services compared to 2021.

Ms White echoed these findings, saying that the Earlsfield food bank needs four times as many donations as it did 12 months ago, in order to meet the rising demand.

Not only are ‘overall numbers’ of users on the rise, but the complexity of people’s problems and ‘the state they’re in’ when they visit the food bank is also worsening, she added.

For example, the service now regularly sees ‘people that haven’t eaten for two to three days when they come to us’. Ms White added: ‘We used to see that very rarely, maybe once every few months, but now all the time its people who may not have eaten or whose children might not have eaten. It’s such a stark difference from where we were 12 months ago.’

In response to the rising cost of living, a number of NHS trusts have been giving out advice to staff on how to cope.

In an email seen by Nursing in Practice, all staff at NHS Ayrshire & Arran in Scotland were given advice on how to access food banks and food larders should they find themselves ‘in financial difficulty’.

The email contained the addresses and contact information for a number of local food banks, as well as details on what would happen if a person is referred to a food bank.

It said: ‘The purpose of this stop press is to give you information on food banks and food larders in Ayrshire should you find yourself in financial difficulty… Depending on your circumstances, you may be able to access food bank support, or you
can join your local community food larder or pantry.’

An anonymous staff member at the trust told Nursing in Practice that the email to staff served as ‘confirmation that management is aware of the difficulties staff are facing with regards to the income against the cost of living rises’, but they stressed that there remains a lack of a ‘real solution’ to the problems that staff are facing.

The staff member continued: ‘But I do think nurses in my area will need this. How, on any level, is this right? How, in this day and age, can it happen that healthcare workers with full-time jobs need support buying food?’

A representative from the trust said: ‘We are aware that food poverty has been an issue in Ayrshire for some time, and that the cost-of-living crisis has added to the situation. Most of our staff live in Ayrshire, and may be experiencing the same financial pressures being faced across Scotland.’

The trust has set up a ‘Financial Inclusion Task and Finish Group in response to the cost-of-living crisis’, the spokesperson added. This group ‘highlights topics such as money matters, debt, scams, credit unions and food banks, and provides information on these topics to our staff’.

Commenting on the email, Ms White said: ‘It’s good that people know what support and information is available. Accessing a food bank can be quite confusing and there are quite a few myths. We also find that there are a lot of emotional barriers and people can’t take that first step. We are based in a church and we often see people hanging about the garden as they can’t bring themselves to come through the gate.’

A government spokesperson said: ‘We value the hard work of nurses and are working hard to support them in these challenging times – including by giving over one million NHS workers a pay rise of at least £1,400 this year as recommended by the independent NHS Pay Review Body, on top of 3% last year when pay was frozen in the wider public sector.

‘We are directly supporting households in need following the aftershocks from the pandemic and Putin’s illegal war in Ukraine, including sending another Cost of Living Payment this month worth £324 to over 8 million people, part of a £1,200 package for those on the lowest incomes.’

This comes after Gillian Keegan, the education secretary, faced criticism this week after claiming that nurses usually use food banks after the breakdown of a boiler or a relationship.

Earlier this week, the RCN revealed nurses from all four nations of the UK are set to join the picket line as it announced the biggest wave of strikes in the union’s 106-year history following a recent below-inflation pay offer for staff.