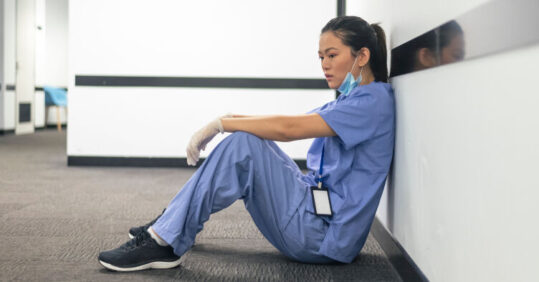 Health secretary Steve Barclay reportedly told union leaders that nurses and NHS workers must work harder in order to ‘justify’ a pay rise at a meeting of union leaders yesterday.

Unite negotiator Onay Kasab revealed in a statement that Mr Barclay told negotiators in a meeting that staff would need to increase productivity in order for the Department of Health and Social Care (DHSC) to consider awarding a pay rise for nurses.

In response, the union said it was ‘absolutely clear’ to them that the government ‘wants our members to give more in order for it to consider a payment – that is absolutely outrageous’.

On Monday, the Government held separate meetings with representatives from the health, rail, and teaching unions, aimed at bringing an end to the wave of strike action affecting the country.

However, the RCN’s strikes this January will go ahead as planned after the negotiations failed to reach any substantial agreement with RCN representatives branding the meetings a ‘bitter disappointment’.

The health secretary’s comments drew anger on social media from nurses who raised concerns that asking overworked staff to work harder would only contribute to the issues of burnout affecting the NHS currently.

Lena Johnson, nursing manager at Bedfordshire NHS Hospitals and RCN professional lead for nursing workforce, said in a tweet that this was a ‘sad state of affairs. Everyone I know works so very hard. But the system is not working for patients nor for the workers… If the foundations are not working then [this] is just sticking plasters.’

Research published by the King’s Fund last year shows that there was a sharp increase in vacancies in the NHS driven by a larger number of staff choosing to leave the staff before retirement. The data found that two-thirds of nurses leaving the NHS were under 45, 26% more than in the previous year.

‘I couldn’t give another moment to the NHS even if I wanted to,’ Ms Brooks told Nursing in Practice, ‘I work five days a week from 7am to 7:30pm. I don’t know what we could do to be more efficient, usually there are six beds in a bay but now we are responsible for nine patients with three beds in the corridor.

‘I didn’t think moral could get lower till I heard the comments, it’s just another kick. They [the government] don’t value nurses and now it’s clear that they don’t understand nursing.’

While retirement still remains the most common reason for nurses leaving the NHS, work-life balance became the second most common reason; suggesting that more nurses are being driven away by overworking and unsociable hours.

However, in a significant development from yesterday’s talks, it is not understood that the the Government is now considering a one-off payment.

The health secretary reportedly told unions that he will consider making a payment, potentially in the form of a hardship fund, ahead of a review looking at next year’s pay settlement starting in April.

Mr Barclay ‘requested further discussion’ with union leaders and asked for more ideas that could ‘unlock additional funding’ in the NHS, according to the DHSC.