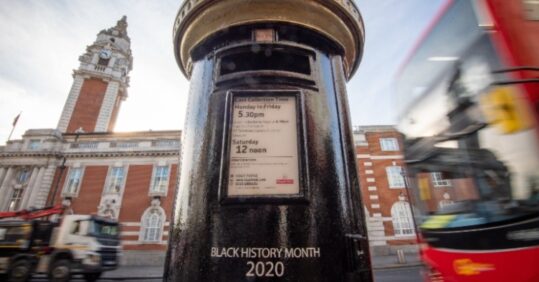 Four postboxes across the UK have been painted black to honour black Britons, including Mary Seacole, to mark Black History Month in October.

The Royal Mail postboxes – in London, Glasgow, Cardiff and Belfast – each feature a significant figure in the British black community and has a social media link.

Mary Seacole, who nursed wounded British soldiers back to health during the Crimean War, features on the postbox in Cardiff, chosen for its proximity to Cardiff City Hall.

The aim is for the postboxes to help people mark the success of black Britons, Royal Mail said.

A QR code on the postboxes can also be scanned to bring up a full list of all the black Britons who have appeared on special stamps across the years.

Ms Seacole also featured on a set of stampes released in 2006 to celebrate the 150th anniversary of the National Portrait Gallery.

Royal Mail head of diversity and inclusion Peter De Norville said Black History Month is ‘a great opportunity to celebrate the contributions that black people have made to this country over generations’.

He continued: ‘We are also using it as an opportunity to celebrate the vital work that our black employees do throughout the nation, from the mail bag to the meeting room.’

Nursing in Practice has launched a survey to find out about the experiences of primary care and community nurses, and midwives over the past 12 months around race and equality.