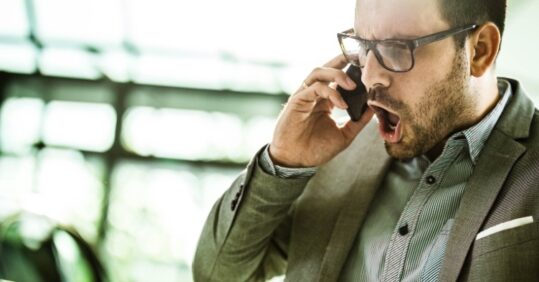 Young displeased businessman arguing with someone over smart phone while being in a car showroom.
Kathy Oxtoby

Incidents of abuse towards primary care nurses during Covid-19 are on the increase, practitioners have told Nursing in Practice.

Shouting, swearing, racist behaviour, and accusations of ‘not caring’ are just some of the many examples of abuse nurses are facing on a daily basis.

Figures from the 2020 NHS Staff Survey showed that 28.5% of the 569,440 NHS employees in England had experienced bullying or harassment from patients, their relatives or the public.

Anecdotal evidence given to Nursing in Practice has shown a similar picture in practices and staff there have explained the problem is getting worse.

One primary care nurse who asked not to be named, said that since the pandemic, for about ‘10% of every day’ she is verbally abused by patients.

‘Patients swear at me, make personal comments about the country I come from, and say that I “don’t care”.

‘When you get this disrespect it makes you feel despondent that people think they’ve got the right to abuse you.’

She added that because of the amount of abuse from patients since Covid-19, she was ‘thinking seriously about early retirement’.

Another nurse said she had received a letter of complaint from a patient just for giving them health information about their condition. She has also been accused of ‘not caring’, which she finds ‘very hurtful, when you’re trying to care’.

‘This abuse is affecting mine and my colleagues’ morale – we are drained and mentally exhausted. If this abuse isn’t addressed, people will leave,’ she said.

Reasons that abuse towards nurses has got worse during Covid-19 include a perception that they are not offering enough face-to-face appointments, frustration at cancelled hospital appointments, and anxiety about the pandemic.

One GP based in Yorkshire said that practice nurses were having to deal with ‘multiple phone calls during the day where patients were angry and verbally abusive’, because they were frustrated at not being able to see staff face-to-face at the surgery.

Recent surveys of health professionals have also found that abuse from patients during the pandemic is on the increase.

A survey of RCM members last November found that 7 out of 10 midwives had suffered abuse from women and their partners due to Covid restrictions.

One midwife said: ‘Women feel we are robbing them of the maternity care they want. They are angry and feel we do not understand. No matter how much we try to explain some women and families can be incredibly verbally abusive. This is soul destroying.’

A Nursing in Practice survey last October revealed that more than a quarter of nurses have witnessed racist behaviour at work, with BAME workers reporting a worsening situation because of Covid-19.

The scale of abuse may be even greater, with incidents going unreported ‘because filling in a form is a waste of time’, one nurse said.

‘When you do report abuse the practice manager says “we’ll investigate” but nothing happens,’ she said.

Nurses want nursing bodies such as the RCN to raise awareness that while  Covid-19 restrictions mean more phone consultations, care is still being delivered, and to campaign against abuse towards the profession.

Heather Randle, RCN professional lead for general practice nursing, said abuse of any nature is ‘never acceptable and it is important employers provide practical and emotional  support for nursing staff who have experienced this’.

‘Where appropriate, support needs to be provided to report this abuse to prevent it from being repeated,’ she said.